Persecution Blog: A Country Boy, A City Girl and a Prison Convict

« Mightier than the Roaring Waves | Main | Fellowship in Worship »

A Country Boy, A City Girl and a Prison Convict

What can a country boy, a city girl and a prison convict have in common?

This might sound as an odd question, but in God’s economy there’s a never ending sequence of what we might call “odd.”

Let me start with the country boy.

He was born the year Nazi Germany invaded Poland, the fifth child of six in a family of small land-owners in the heart of Transylvania. He was six when Russia invaded Romania, to drive out the Germans, and forgot to leave. He was eight the year the King abdicated and the communists took over the country after rigged elections. As catastrophic as that turned out to be for the country, the bigger and more personal tragedy happened in the boy’s life that year when his mother, suffering from misdiagnosed appendicitis, suddenly died.

The question “why” would haunt the boy over the years, even as the communists took over the family’s land and animals, forced them to work the state’s land “voluntarily,” imposed enormous taxes on them and forbid the children a higher education. 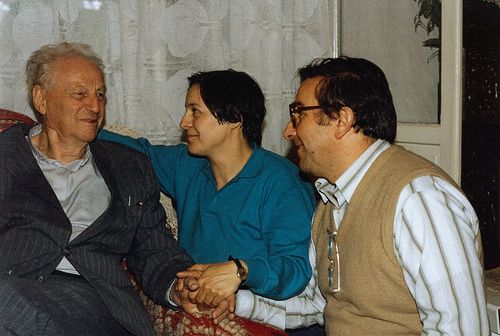 The year was 1956. He had just been released thanks to a general amnesty, after spending 8½ years in prison, many in solitary confinement. The crime for which he had been separated from his wife and only child was this: serving and praising no one except his Lord and Savior. The condition for his freedom was that he would never preach again.

Of course, the first thing Richard Wurmbrand did when he got out of prison was go around preaching the gospel of Jesus Christ. On his way home to a wife who thought he was dead and a child he hadn’t seen in nearly nine years, he stopped in villages and encouraged burdened pastors and persecuted churches to stand firm and remain faithful.

In one of those village churches, a young man of 17, bitter over the loss of his mother and of the family’s property, resentful of his actual slavery to a corrupt and tyrannical state, was listening. Pastor Wurmbrand preached about the glory that awaits us in heaven. As the image of God’s home began to take shape in the young man’s mind, promising the presence of his mother once again, his heart was fully turned to the Giver of eternal life and the young man dedicated his life to Him.

I began to know the depth of that dedication when that man welcomed me, his daughter, into the world nearly 20 years later.

So that’s the country boy and the convict. Let’s return now to the city girl.

She was born, the youngest of six, to the family of a clerk-turned-pastor right after the family returned home to Cluj-Napoca, Transylvania, after having lived as war refugees in then-kingdom Romania.

She was not yet 10 years old that summer when Richard Wurmbrand came out of prison and visited her home to encourage and be encouraged by her father, pastor Ioan Dan, one of the founding pioneers of the Baptist Church in Transylvania. To this day she remembers her sister washing Pastor Wurmbrand’s calloused, damaged feet, and taking him to the train station with her father. The strong friendship the two pastors shared provided a lasting impact on the little girl’s life over the next three years of freedom for Pastor Richard, and during his subsequent 5-year stay in prison.

Although Richard Wurmbrand returned to prison in 1959, the eternal impact he had had on my family was already made. That little girl grew up to be my mother, and although the Wurmbrands were no longer living in Romania in 1972 when she met my father, nor a few years later when they got married, the Wurmbrands’ presence was – as it will forever be – etched into our family’s very existence.

I had the unspeakable honor to meet Richard and Sabina in 1994, when I was a freshman at Columbia Bible College (now Columbia International University). As I introduced Pastor Wurmbrand to the student body in chapel, I couldn’t help but think: God’s ways are odd.

“Holy” means set apart, or different. It is, in a way, synonymous with odd. I love my wonderfully and mysteriously odd God. I love that His ways are higher than my ways. I love that He can see and plan what I can’t. I love Him for helping me grow in faith by giving me hindsight. My personal history – the Wurmbrands included – is the way hindsight helps my faith. The same is true for all of us: we are creatures that lack the big picture; we see in hindsight what we should have seen in faith: that our mundane, day-to-day and year-to-year comings and goings are somehow being turned into something that makes sense. That our words and actions have an eternal impact, no matter how small and inconsequential they may seem. That our stand for faith now has a very real consequence on what will be down the road. That the glass of water we give can turn into a river of blessing. That the prayer we say now can shatter the world and shape the future.

If there’s one encouragement I have to give, it is this: our God is spinning every little thread of our life, every little history, experience, decision and action into a work of art. I am – and you are – His masterpiece. Both in hindsight and in faith, I’ll say: we look AMAZING!

Ioana Achim grew up in communist Romania and was a teenager when the communist regime fell. She graduated from Columbia International University in the US and returned to Romania, where she currently lives and works.

In 1994 on that same trip by Dr Wurmbrand, he spoke to our then small singles group, Seekers, at First Presbyterian Church in Augusta, Ga. I'll never forget that during his imprisonment and torturing, he said he kept praying for the youth of America to come to and serve The Lord . He was praying for us!! Wow, what a Christ like example he was to us, and what a challenge!

I'm just reading Wurmbrand's book, The Wurmbrand Letters, and remember his time in chapel, and getting to know Ioana at the time. His faith puts me to shame, but spurs me on.

Oh such powerful words, what an amazing story. The Holy Spirit is shown through these stories of humanity. Just let go and let God take the wheel. He knows the path he wants to take you, straight into his arms. Amen Lord Jesus Christ giver of eternal life.

What an incredible story! Thanks for sharing...just the reminder that I needed, God orchestrates everything perfectly and exactly, so that anything and everything can be an expression of His love...

So blessed our Papa God continues to weave His children into a Beautiful Remnant His Love Never fails.