“I had prepared myself…”

I knew that I faced questioning, ill-treatment, possibly years of imprisonment and death, and I wondered if my faith was strong enough. I remembered then that in the Bible it is written 366 times—once for every day of the year—"Don't be afraid!": 366 times, not merely 365, to account for Leap Year. And this [the day of my arrest] was February 29—a coincidence which told me I need not fear!

The interrogators showed no hurry to see me, for Communist jails are like archives, to be drawn on at any time when information may be needed. I was questioned again and again over the whole fourteen and a half years I spent in prison. I knew that in the eyes of the Party my connections with the Western Churches were treasonable, but there was much else of importance which they did not know and must not learn from me. 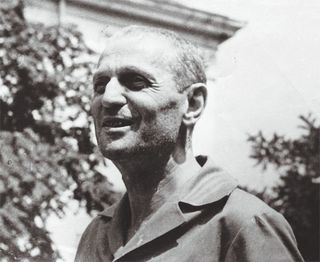 I had prepared myself for prison and torture as a soldier in peacetime prepares for the hardships of war. I had studied the lives of Christians who had faced similar pains and temptations to surrender and thought how I might adapt their experiences. Many who had not so prepared themselves were crushed by suffering, or deluded into saying what they should not.

Priests were always told by interrogators, "As a Christian you must promise to tell us the whole truth about everything." For my part, since I was sure of being found guilty whatever I said, I decided that under torture I might incriminate myself, but never betray friends who had helped me to spread the Gospel. So I planned to leave my interrogators more confused at the end of their investigation that at the start. I would mislead them to the hilt.

My first task was somehow to get a message out to warn my colleagues and let my wife know where I was. I was able to suborn a guard to act as intermediary, for at that time my family still had money. He received about 500 pounds for carrying messages over the next few weeks. Then everything we owned was seized.

Excerpted from In God's Underground, written by Pastor Richard Wurmbrand, the founder of The Voice of the Martyrs. You can order a copy of the book here; it is also available for Kindle and Nook e-readers. 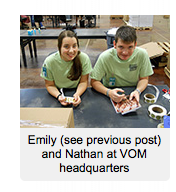 For example, did you know that Kids of Courage has their own blog?  Yup, it's true.  Almost everyday they list stories and happenings so that you know how to minister to children and tell them about the persecuted church in an appropriate way.

There is also a wonderful video section on the Kids of Courage page that you will want to look at, as well as my favorite section which is the downloads section.  The reason I like the downloads section is because that section is loaded with great material and all you have to do is sign up for a free account and you can get all of the resources for free.  This is a great resource that parents can use for family bible learning, and Sunday school teachers can use to teach their classes.  Be sure to check it out.

I also wanted to tell you that right now we have highlighted a two part series concerning how volunteers have learned more about the persecuted church by helping The Voice of the Martyrs.  In part one of the blog posts you'll read about Emily, who said regarding the persecuted church and volunteering, “gives a huge picture of what loyalty to Christ means,” and “It’s humbling.”

In part two you'll read about Nathan's experience and see his comment, "“I never really thought about persecution in other countries were [going to church] is against the law.”  Click here to visit Kids of Courage today.

Posted by The Voice of the Martyrs on July 24, 2012 at 05:12 PM in Christian Action, Christian Persecution, Kindle | Permalink

Today I have exciting news to share with you because I just found out that 16 of the books that The Voice of the Martyrs offers are now available at Amazon, for the Kindle for only one dollar each. That is an amazing deal! If I were you, I’d get all of the books today.

If you were to purchase all of these books individually at their regular cost, it would cost you easily over one hundred dollars. Now, you can buy all 16 of these books for only $16! What an amazing deal!

Here are a few of my personal favorites:

In God's Underground by Richard Wurmbrand

The Answer to the Atheist’s Handbook by Richard Wurmbrand

With God in Solitary Confinement by Richard Wurmbrand

If Prison Walls Could Speak by Richard Wurmbrand — this book is my favorite.

I hope you take some time to check a few of these out because they are wonderful devotional material, as well as inspiring and thought provoking. Richard Wurmbrand offers solid meat with much substance to his readers, based on his experiences suffering for Christ.