In the remaining days of 2016 we'll look back on the most-viewed posts on Persecution Blog in 2016, including a post that is more than 10 years old but is still one of the most-read posts on the blog! Today we look at #6, sharing two different responses from readers to this year's IDOP story:

"What They did Was Unconscionable" 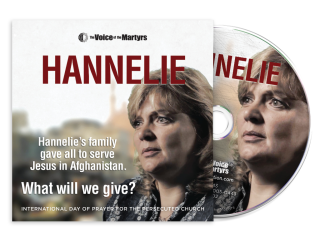 By now you know of VOM’s 2017 IDOP video called Hannelie and have read the October newsletter with her story.

A couple of weeks ago, Andrea H. wrote to us after she read the story in the newsletter:

Hello. I am stunned by this month's cover story of Hannelie and am particularly interested if there are others who are utterly in shock that these two people would endanger their children. I believe what they did is unconscionable; if they were in the United States, they would have had their children removed from their custody. How dare these people put those vulnerable kids in harm’s way. I'm absolutely blown away by this irresponsible act, as well as your tacit approval of all of it.

What did you think? Did you feel the same way Andrea did? Did Hannelie and her husband make an irresponsible choice regarding their children?

On the other hand, Bob S. wrote us this note:

When my wife and I watched the DVD Hannelie, I got depressed. I realized that in my quiet time or during a good sermon or rousing Christian song, I was like Peter and ready to “risk my life for Jesus,” but when faced with a situation like distributing Bibles as a Gideon in Chicago–the murder capital of America for over two years–I was chicken at the thought of what might happen.

Well, yesterday, I went into Chicago with other Gideons in a pretty safe neighborhood and all I suffered was indifference at the offer of a free Bible–plus many were open to accepting the Lord. Pray that Friday I will be a credit to His name and be willing to endure whatever may come when we venture into a place a lot less threatening than the people you support.

Sincerely in His service, 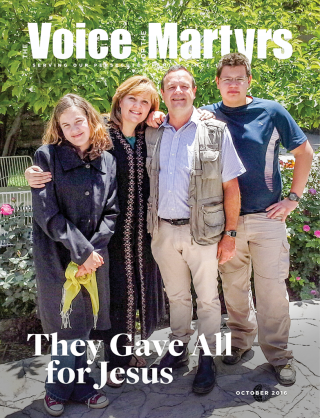 Bob had a completely opposite response to Hannelie’s story. Her story inspired him to take more risks in sharing the gospel, even in a dangerous part of America. Is it foolish of Bob to take that risk? Please join us in praying for Bob as he shares Christ through the Chicago area, and that his work will result in much fruit.

I’ve written before about trying to bring my young children up by praying for our persecuted family and with the knowledge that persecution could come to us. And if the Lord calls us to Afghanistan, to Saudi Arabia, to North Korea, I would take them with me. Jesus promised us persecution. He said that his message would divide families, and he said that no sacrifice was too great for him.

What about you? Are there some sacrifices that are too great?

Dory P. grew up the daughter of missionaries in Ecuador, met her husband while working with another mission organization, and now lives in Oklahoma. Their family of four shares seven passports. Dory helps tell the stories of the persecuted through VOM's newsletter, and her husband serves with VOM's international department.

Martyr's Widow: "Peace Came Over Me"

In the second half of our conversation, Hannelie Groenewald recalls the day her husband and two teen-aged children were killed by the Taliban in Afghanistan. She tells us which Psalm she read over and over again as she waited to hear whether her family was alive or dead, and the amazement of Afghans at her ability to forgive the Taliban murderers.

Hannelie shares hard-earned truth with listeners who may be struggling to forgive someone who has wronged them, and talks about her future and God's faithfulness as she is finding her footing after the loss of her family and seeking God's plan for her in the coming years. She'll also equip us to pray more effectively for the nation of Afghanistan and for our Christian brothers and sisters there.

Request a DVD or download the video telling the story of Hannelie and her family, which was produced by VOM for this year's International Day of Prayer for the Persecuted Church. Please share this video with your church family or other Christian friends.

When Hannelie Groenewald and her family left their comfortable home in South Africa to serve on the front lines in Afghanistan, they knew the danger. But God's call was clear, and they went in spite of the risk. Hannelie became not only wife and mom, but also teacher and doctor and cook in a country that isn't known for welcoming foreigners--especially women.

As time passed, God strengthened her faith, even if He didn't answer all her questions or prayers. She didn't know the extent of the sacrifice her family would be called to make, and in fact says she wasn't strong enough to make such a sacrifice. But God prepared her, even in the days and weeks immediately before the murder of her husband and children, to stand strong in the face of suffering and persecution.

Hannelie's inspiring testimony will challenge you to consider what you're willing to risk to share God's love in an increasingly hostile world.

Request a DVD or download the video telling the story of Hannelie and her family, which was produced by VOM for this year's International Day of Prayer for the Persecuted Church. Please share this video with your church family or other Christian friends.

Nov. 6, 2016, is the International Day of Prayer for the Persecuted Church (IDOP). VOM invites you to request your free IDOP video, Hannelie, on DVD or by direct download.

When Hannelie and her family left their comfortable home in South Africa to serve on the front lines in Afghanistan, they knew the risks. But they wouldn’t deny God’s call. This year’s IDOP video from VOM retells her family’s story of faithfulness and sacrifice amid those hostile to Christ.

Hannelie’s inspiring testimony challenges each of us to consider what we are willing to risk to share His love in an increasingly hostile world.

Earlier this month Muslims around the world finished their celebration of Ramadan, the holiest month on the Islamic calendar.

During the final 10 days of Ramadan, The Voice of the Martyrs was one of the ministries involved in a world-wide effort to encourage Christians to pray specifically for a move of God’s spirit to draw Muslims to Jesus Christ during Ramadan. The effort was coordinated by author Tom Doyle and our friends at CBN News, and featured a Facebook Live prayer meeting each evening at 8:38 (EDT) for the last 10 days of Ramadan.

The videos posted have now been watched more than half a million times! Only in eternity will we know how many prayers have been encouraged by this effort, or how many Muslims responded to Christ’s call as a direct result of this prayer effort.

Ramadan has ended, but there is never a bad time to pray for Muslims to come to know Jesus. On the blog we’ll be sharing videos from all of the speakers who were part of this special effort. May each one remind you to continue to pray for Muslims, not only during Ramadan but throughout the year. Today's prayer leader is Heather Mercer, former gospel worker and hostage for Christ in Afghanistan:

I tell our persecuted Christian family that you will pray for them. Will you make it true this Sunday?

I travel continually to meet with members of our persecuted Christian family in the world’s most hostile and restricted nations. When I am with them, I am usually involved in VOM’s work to provide them with material aid, Bibles and ministry tools. But I am also there to carry out our most important work: providing spiritual encouragement, which always includes a prayer commitment. I look them in the eyes and tell them that you, their Christian brothers and sisters in the U.S., will be praying for them.

Our commitment to pray means everything to our persecuted Christian family in places like Syria, Nigeria, Iran and Afghanistan. Our Christian brothers and sisters realize that, in our prayers, they are not forgotten. They do not stand alone because they have Christ’s presence and our prayers. I am always humbled and challenged when they testify that since they have Christ and His Body, the Church, they have everything they need. They have the right values and priorities in this way — something I struggle to achieve each and every day.

Recently, I returned from the ISIS front-lines in Iraq and tearfully appealed to our U.S. staff here at VOM with a challenge that I give you now:

I have just been with our persecuted Christian family members. They are suffering for Christ and serving Him faithfully in the midst of extreme peril and great need. I told them that you will be praying for them, and I challenge you now… in fact, I plead with you… Make it true!

This Sunday, April 17th, our friends in several organizations that represent religious freedom interests — including Family Research Council, Open Doors, Christian Solidarity Worldwide and others — are challenging American Christians and churches to lift up our persecuted Christian family in prayer. Here at The Voice of the Martyrs, we want to join in that appeal.

April 17th has been dubbed, “Stand with the Persecuted Sunday.” You, and your church/group will be blessed by participating. Please go to frc.org/stand to learn more.

Cole Richards is the Executive Vice President of The Voice of the Martyrs. See persecution.com/bios to learn more.