The end of an era comes next month. In August 1985, I clutched my mom’s hand and squeaked my rubber flip-flopped way down the gravel path from the Mission Aviation Fellowship (MAF) “base” to the cinderblock Nate Saint Memorial school. Miss Carolyn Wolfram greeted me and the three other kindergarten students and we took our places at the red, yellow, blue and green desks.

David’s parents were with Gospel Missionary Union, running a conference center for training local church workers. Rebekah’s dad was an anesthesiologist at the HCJB mission hospital in town. And Cristina’s parents worked with the local church while her dad trained to be a pilot with my dad at MAF.

I completed all of my elementary education through the sixth grade at Nate Saint Memorial School. In my era, the school hosted around 30 kids in kindergarten through eighth grade; all of our parents were involved in various ministries and denominations and types of mission work in the tiny town of Shell, perched on the edge of Ecuador’s Amazon rain forest.

At NSMS, as we called it, classes were frequently put on hold so the school children could perform a song for visiting tour groups from the U.S. We marched in the town parades proudly carrying a banner with Nate Saint’s name on it, and when we got tired of standing in the hot sun, our teachers would exhort us to set an example for the Ecuadorian schools, because they knew we were the “evangelical” school.

Class sizes were small, and like a prairie school house, often contained multiple grades. After the teacher got the third graders working in their math workbooks, she might quietly read the English assignment to the fourth graders on the other side of the room. When there were political strikes and no one could travel around town, we had classes in homes, books spread out on dining room tables with our mothers overseeing us.

Thursday afternoons were for swimming, when the whole school would pile into the rattley GMC mission vans and head for the river. The teachers would try to make sure we didn’t drown in the fast current while I worked up the courage to finally jump off that big rock into the deep spot.

When the eighth graders needed frogs to dissect for science class, they first spent an evening out behind the school, capturing toads and dunking them in formaldehyde from the hospital. The surgeons’ wife came over on Tuesdays to have us draw still-life paintings.

Every day on my way home from school, I’d pass the long wooden house of the Brethren church planters who were working with the indigenous people, including many of the Waodani (the tribe responsible for killing Jim Elliot, Nate Saint, Ed McCully, Pete Fleming and Roger Youderian). Waodani teenagers lived with them for months at a time while completing their education in Shell, education that wasn’t available in the jungle. The hope of the church planters was that these young people would return to their villages with a firm spiritual foundation that they could share with their communities.

The school for the children of missionaries founded in 1966 in memory of those missionary martyrs—Nate Saint Memorial School—has run its course. Fewer missionaries are needed in the region, and more are choosing to homeschool their children. 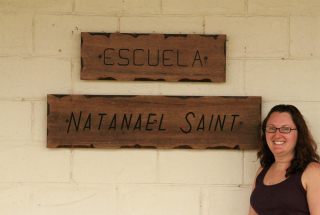 The end of an era has come, but its purpose was well-served. My kindergarten teacher, Miss Wolfram, would go on to have a 32-year-long career serving the mission community, in Shell and later in the capital city at the boarding school. She’s retiring this year.

Several schoolmates went on to become missionary pilots. One is serving as a military chaplain. Another is a church planter in Mexico. One girl ministered with her family in Yemen. Another one trains pastors in the Dominican Republic. My sister and her family work with youth in Ecuador. And then there’s me: privileged to serve persecuted Christians around the world. Christians who are just as willing to sacrifice their lives in order to share the gospel as the school’s namesake, Nate Saint.

Dory P and her husband both work for VOM. Dory grew up calling Nate Saint’s sister “Aunt Rachel” and Jim Elliot’s widow “Aunt Betty.” She and her husband serve on VOM’s staff.