In the remaining days of 2016 we'll look back on the most-viewed posts on Persecution Blog in 2016, including a post that is more than 10 years old but is still one of the most-read posts on the blog! We begin today with #8: a look back on the man most responsible for having the Bible in English; William Tyndale.

If you read the Bible in English, you owe a debt of gratitude to William Tyndale. Today (October 6) marks the anniversary of Tyndale’s execution at the stake in 1536 for the “crime” of translating the Bible into English. Here is Tyndale’s story, as told in VOM’s book, FOXE: Voices of the Martyrs.

William Tyndale was a well-educated scholar who was frustrated at the distance between English education and the Bible, the source of truth. Studying at Oxford and then at Cambridge, he bristled at the barriers and longed for the nourishment his mind and heart treasured. “In the universities,” he said, “they have ordained that no man shall look on the Scripture until he be nozzled in heathen learning eight or nine years, and armed with false principles with which he is clean shut out of the understanding of the Scripture.” Tyndale’s life would be devoted to overcoming just this obstacle. For him, the Bible “for the people” would become the answer to corruption in the church. The Bible “for the people” meant that all could drink from the truth itself, without pressure or pretext; and most clearly, without a priest to read or interpret.

Tyndale was born sometime around 1494 in Gloucester, England, near the Welsh border. Ninety years earlier the Church had banned the only English Bible in the world, the hand-copied work of John Wycliffe. It was a flawed translation, based on the Latin Vulgate, but it was all English speakers had. And to have it was a crime. Tyndale’s passions eventually settled on a mission as dangerous as any in his century: to work from the Greek and Hebrew texts to create a Bible in vernacular English, so readable and accurate that an Englishman could depend on it, learn from it, and find God’s voice in it. All this was clear to the multilingual Tyndale by the age of thirty. 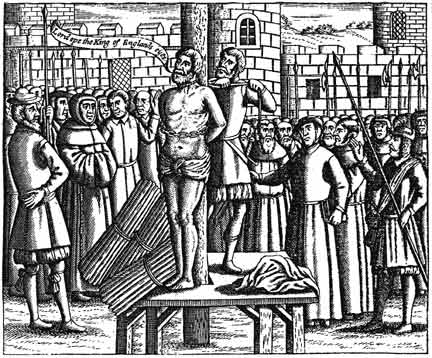 To do that work, Tyndale had to leave England. No bishop in the realm would protect him, much less encourage the project. Tyndale traveled to Germany where he completed the New Testament in 1525. Then he went on to Antwerp, one step ahead of English agents, where the first five Old Testament books were translated and printed. In Belgium he met a community of English merchants, and though agents were searching the continent to find him, Tyndale felt secure enough to relax his guard. His lack of caution would prove fatal.

Tyndale took up a friendship with Henry Phillips, who won Tyndale’s confidence but secretly sough the bounty offered for his capture. In May, 1535, the trap was set. Tyndale was taken under guard to the castle at Vilvoorde, near Brussels, where he suffered in dank and cold for eighteen months before standing trial for “maintaining that faith alone justifies…that to believe in the forgiveness of sins, and to embrace the mercy offered in the gospel, was enough for salvation.” The complete list of charges included direct attacks on church teaching, among them that “neither the Virgin nor the Saints should be invoked by us.”

Tyndale knew how these trials ran. He would have no chance at defense, and death was the remedy. With his body shaking from cold and the winter’s light dim for writing, he worked to complete the English Bible, helped by a sympathetic prison governor.

In August, 1536, Tyndale was condemned as a heretic and defrocked. For two more months he was kept at Vilvoorde. Then in early October, just past dawn, he was led from prison to the stake. Formalities included placing the Mass once more in his hands, then quickly snatching it back, the offer of last-minute reprieve if he would only recant, and always the shouts of a crowd gathered to witness a “heathen” die.

Secured to the stake, surrounded by brush and logs, Tyndale was heard to pray, “Lord, open the King of England’s eyes.” Then the executioner snapped hard on the rope, strangling Tyndale before the blaze consumed his body. 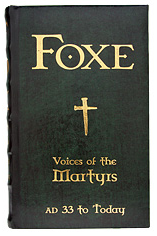 That final prayer was for the bully King Henry VIII, whose pursuit of a male heir had already cost Anne Boleyn her life and Catherine her marriage. So full of his own power and pomp, would the king’s eyes ever fall favorably on Tyndale’s English Bible?

Indeed they did. Two years after Tyndale’s death, King Henry authorized the distribution of the Matthew Bible, much of it Tyndale’s work. And then, on November 14, 1539, all printers and sellers of books were ordered by the king to provide “for the free and liberal use of the Bible in our own maternal English tongue.” Tyndale’s dream and his last earthly appeal had come true.