Nine year old Cole Staples from South Carolina is making a difference in the lives of his persecuted family. Below, Cole shares in his own words how he got involved with VOM: 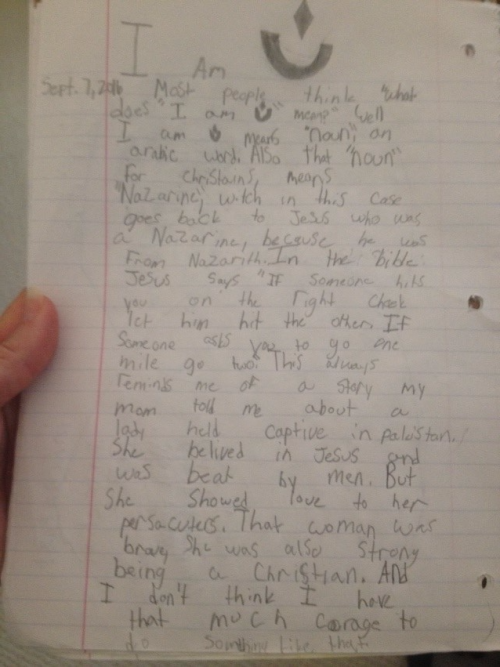 Photo: Cole explains in a letter what “I Am N” means to him.

“When my Mom got home from the (VOM) conference she gave me a packet that had many mail forms and people that are in jail. So when she gave me the packet, I looked through the people who were in jail and saw Mrs. Asia Bibi and so I decided I would pray for her. Then once I saw the envelopes I told myself every day after school I would work on the letter to her.

Once I mailed my first letter, I couldn’t stop writing letters. I just felt awesome writing to people overseas! So I wrote to people like Farshid Fathi, and Alireza Seyyedian and Imran Ghafur. Then by the time the month was over I had written like 6 letters to persecuted Christians.

Then I signed up for the Prisoner Alert. Then on Monday, October 10, 2016 I got a (VOM) email saying that a judge would tell Mrs. Bibi if she would be released or killed on Wednesday, October 13, 2016. So my family and I prayed hard. Then that day came. The (VOM) email said that the judge would not handle the case. We were relieved and still nervous the next judge would say to kill her. We have been waiting ever since for the next email. It makes me feel sad thinking about families that must go into hiding because of persecution. I really hope my story will inspire other kids to learn about and pray for our persecuted families.”

Find ways for your children to get connected with their persecuted family members at www.kidsofcourage.com and you can write a letter to Asia Bibi and other believers imprisoned for their faith at www.prisoneralert.com.