Persecution Blog: What Will Happen in Mosul?

« VOM Radio: Inspiring Christians | Main | "What They did Was Unconscionable" »

What Will Happen in Mosul?

VOM's Todd Nettleton was interviewed this week by Mission Network News' Lyndsey Koh for a story about the battle for Mosul, and especially what the freeing of that city will mean for Christians in the region. Here is an excerpt from the resulting story:

Iraq (MNN) — On Monday, Iraqi forces and their allies launched a new offensive on the city of Mosul in an attempt to reclaim it from ISIS. 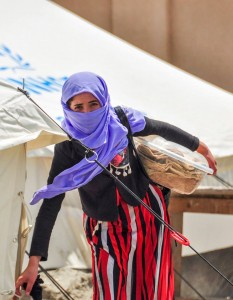 An Iraqi refugee displaced by the self-proclaimed Islamic State (ISIS).

Mosul is ISIS’ largest stronghold in Iraq. The major city has been under ISIS control for the past two years. Currently, the BBC estimates around 5,000 ISIS fighters are still fortified in the city.

Sirwan Barzani, a Peshmerga military commander, said the process to reclaim Mosul could take as long as two months. At the offset of the attack this week, Iraqi forces were met with heavy gunfire and a smattering of suicide car bombers.

Todd Nettleton with The Voice of the Martyrs -- USA says Mosul has been a symbol of power and status for ISIS in Iraq.

“[When] they took over the city, it was a part of their so-called caliphate. The fact that they controlled physical territory, including a major city like Mosul, was a big part of their appeal in their recruiting process, [saying], ‘Look, we’re a state! We’re a country! We have territory! We have cities!… If you’re a good Sunni Muslim, you need to get here. There is now a caliphate in existence, we control territory, we’re led by a descendant of the Prophet Muhammad.’”

If Mosul is reclaimed, Nettleton explains the loss would weaken ISIS’ reputation and strength.

“The less territory they control, the less economic heft they have, the harder it becomes for them to spread that message and say [they’re] a functioning state. As they lose territory, that becomes a tougher sell.”

However, if Mosul is indeed freed from the clutches of ISIS, there would be a lot more question marks for the future. The most obvious ones would be: Now what? Who will be in charge?

Read the rest of the story on the Mission Network News web site.