Recently, a few of us from The Voice of the Martyrs had the pleasure of visiting a long-time VOM supporter. 100-year-old Edna Bealle has been supporting VOM for 25 years.

Edna had eyes that twinkled and a charming, crooked grin and a confidence that can only come from knowing you are well-acquainted with the King. 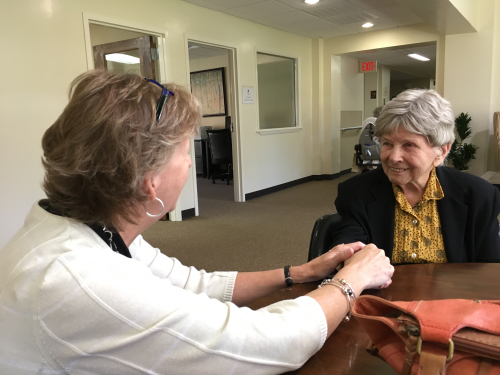 We wanted to honor Edna with our visit and hoped it would not affect her health, but she surprised us with her spry mental health and a heartfelt trust in the Lord. She truly lives out the words to the song, “Wherever He leads, I’ll go.”

We honored Edna that day with a signed print of a painting by Ron DiCianni called Safely Home. The image shows a tired traveler on his knees resting his weary, bruised body against the Savior while an angel stands to the side ready to give the white robe of welcome to the pilgrim.

As we unwrapped the gift, Edna’s eyes focused on the painting, and she faintly said, “That is beautiful!” She was visibly pleased.

Then she told us her story: she said that listening to the Lord’s voice always leads us home — in this life as well as to our eternal home. Though she’d gone to church all her life, it wasn’t until Edna was 59 years old that the message of the gospel became real to her. From then on, Edna determined to live her life fully for the Lord.

About 30 years, ago, she and her husband were living in Maryland. When her husband began having some health issues, they began to wonder if an assisted living facility might be the best option for them. She told her husband, “We have to sell the house. I can’t take care of you by myself anymore. The Word says, ‘The steps of the righteous are ordered by the Lord,’ so let’s pray about this.”

A brochure arrived in the mail one day, from a facility in Oklahoma. In Edna’s mind, that was too far away. However, her husband kept coming back to the brochure. One day, he decided they would go for a visit. They agreed ahead of time that they would not make a decision during the visit. However, after a few days in Oklahoma, Edna’s husband surprised her when he asked the president of the facility, “Where do we sign?” The couple returned to Maryland to pack up their belongings and put their house up for sale.

One day the impact of the move hit Edna as she stood in front of the refrigerator. She prayed, “Lord, I don’t want to move to Oklahoma! I will miss my children!”

But she felt him say, “Go. You’ll see more of them if you go than if you stay.”

They obeyed, and just a few years later, one of their sons and his wife ended up moving to Oklahoma.

At one point, Edna received a VOM newsletter and was touched by the stories. The Lord spoke to her again and said, “I want you to give to this ministry.” She’s been faithfully giving ever since.

I asked Edna was made her so committed to sticking with VOM after so many years. She told me, “God is pleased with this ministry. I want to please Him and I want to be a part of whatever pleases Him!” She spoke with a twinkle in her eyes, I think, knowing that just like the painting, when Edna arrives at heaven’s gates, she will receive her eternal reward for her faithfulness.

It was such a blessing to visit with Edna, and such a privilege to be in the presence of one of God’s faithful servants. As she’s passed through life, she kept her eyes on the prize: her eternal reward, the “Well done, my good and faithful servant!” we all hope to hear when we get home. May it be so with every one of us.

Sign up here for a free subscription to VOM’s monthly newsletter.

TM is a VOM staff member. She lived for many years in Malaysia and Indonesia before joining the staff at VOM.