« Help Give a Bible to Every Believer | Main | VOM Radio: "We Have to Apply What Jesus Said" »

Torchlighters: Not Just For Kids

Torchlighters DVDs, produced by Christian History Institute and The Voice of the Martyrs, introduce today’s kids to the lives of heroes of our faith. The DVDs’ animated 30-minute features teach children the true stories of bold believers who came before us.

But did you know that the DVDs also include feature-length documentaries about the heroes? 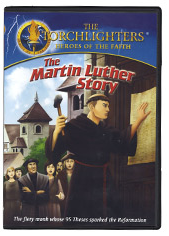 The newest Torchlighters DVD, The Martin Luther Story, has been released just in time for the 500th anniversary of Luther’s 95 theses. The animated segment, teacher’s guide, and student handouts on the DVD help teachers and parents explain the story behind the Protestant Reformation.

The 90-minute documentary on the DVD, Luther — His Life, His Path, His Legacy, includes informative interviews with historians and scenery from the region where Luther lived, interspersed with clips from the movie Luther.

The Samuel Morris Story is the true account of a young African “missionary to North America.” The accompanying documentary tells the story of Morris’s remarkable journey from Africa to New York, and how he led many Americans to Christ before his death in 1893 at the age of 20.

Torchlighters DVDs are available at vombooks.com. Teasers for the DVDs and downloadable lesson plans can be found at torchlighters.org and kidsofcourage.com.

You’re never too old to be inspired!

(Note: Please preview Torchlighters animated features and documentaries before sharing them with children.)

VOM’s Kids of Courage resources help parents and educators teach children ages 5 to 13 about persecuted Christians. The resources provide opportunities for children to serve and pray for their suffering brothers and sisters around the world.