Being strengthened with all power according to his glorious might so that you may have great endurance and patience. Colossians 1:11

The ropes at his wrists and ankles stretched further until Roman Christian Vincent felt his arms pull out of his shoulder sockets and his hips come out of joint.

Decius, the Roman emperor, stood by the rack where Vincent was tied. “You will die in terrible pain,” he told the young Christian.

“No death is more honorable than that of a martyr,” Vincent said to the king with conviction. “I see heaven, and I abhor your idols.” 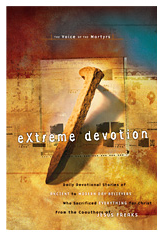 Furious, the king called for the now-crippled Christian to be tortured even more. Yet they could not rid Vincent of his smile. He told the emperor through his pain, “You destroy only my body, which has to perish anyway. Inside of me lives another Vincent, and over him you have no power. That Vincent cannot be put on a rack and cannot be killed.” Vincent welcomed death with a smile.

Finally, the Roman soldiers pulled him from the rack, but his torments were not over. They stripped him of his clothes and threw him into a cell, the floor of which was covered with shattered glass. Unable to stand, Vincent was forced to lie on the ragged glass. Even there, God’s peace was with him. Guards later reported to the emperor that he rested on the shattered glass “as on a bed of flowers.”

In modern culture, the idea of power is tied to authority and office. Power is reserved for the outwardly important, the cultured, and the refined. History, however, shows that people with the mere position of power are ineffective without the inner strength to carry out their duties. In contrast, God targets our inner strength through the presence of the Holy Spirit. Suffering is his classroom, where he teaches us what it is like to be strong. We are able to endure more than we imagined. We are bold beyond our means. You may feel as though your sufferings have made you weak. Ask God to show you how they can, in fact, make you stronger. Flex your muscles. You will see you are stronger than you think.

This is one of the readings from the book, Extreme Devotion, available from VOM’s online bookstore. You can also receive devotional thoughts daily via email or in VOM’s Pray Today App for your smart phone or tablet.

Posted by VOM_MediaDev on September 22, 2016 at 03:18 PM in Extreme Devotion, saints and martyrs | Permalink