« ERITREA: How Do We Understand The Cross? | Main | VOM Funds Church Training in Niger »

“By sending His own Son in the likeness of sinful flesh and for sin, He condemned sin in the flesh, in order that the righteous requirement of the law might be fulfilled in us, who walk not according to the flesh but according to the Spirit.” Romans 8:3b-4 (ESV)

Forgiveness isn’t a natural response. That idea stood out to me as we interns went through the I-Am-N material. When someone hurts me or I witness wrongdoing, my initial reaction is anger. I want the injurer to realize the pain he has caused. Wouldn’t that be just? An eye for an eye, a life for a life — justice. But because our lives belong to Christ, because we are His children, we are not the ones attacked. When Christians are persecuted, Christ is the target. 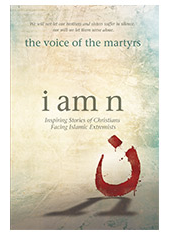 Pain we feel is real, sometimes unbearable, but we only experience traces of the actual hurt. Christ Jesus receives the full impact, for in sin His precious creation acts against Him. As a man, Jesus sacrificed everything for mankind’s sin. In the midst of physical pain, He also endured the emotional and spiritual weight of His Father’s apparent absence. He was the innocent Lamb slaughtered not for His own salvation. He, of all people, had a right to demand justice.

Jesus satisfied the wrath of God, which was directed toward sinful man, by completing justice’s demands. But His action also displayed the most magnificent array of mercy as He took our deserved punishment. His sacrifice established a foundation for forgiveness, a policy of mercy for those who would accept His offer of life.

What astounds me when I read about persecuted believers is that through them God works to spread news of His forgiveness. He has paid the price to justify us and made forgiveness possible. He also enables us to be like Him, vessels of God’s mercy to share the light of His goodness with those in darkness.

J.G. Spires is a college student studying English and Broadcast Media on the east coast. She grew up in a Christian family and came into a personal relationship with Jesus Christ while in middle school. Over the years, the Lord has developed in her a passion for His people and His Word. Her goal is to write for the edification of the Church and the evangelization of the lost. She loves being outside, writing fictional short stories and serving the Church.