Persecution Blog: The Cause for Conflict

The Cause for Conflict

There is no question that the New Testament writers believed Jesus to be the Lord. He alone is supreme and to Him alone we owe ultimate allegiance. What Jesus Christ teaches and commands has priority over all other teaching and authority, both in heaven and on earth. Contemporary followers of Jesus believe this as well.

Therefore, Christ’s command to preach and teach salvation in and through Him should be our highest priority. By obeying this mandate, Christ’s disciples can expect to face opposition. Teaching salvation through Christ alone is the most serious threat to the powers of darkness, directly confronting anything or anyone that would try to usurp Christ’s ultimate authority. Authorities and powers that submit to Christ’s authority (or at the very least don’t claim superiority over it) generally accommodate Christ’s mandate without interference. However, certain ideologies that control some human governments see freedom as a threat to their power. God’s people will seek to fulfill their calling whether governments concur with them or resist them. In reality, the resistance is against God rather than his people or the message. He is the One being rejected. 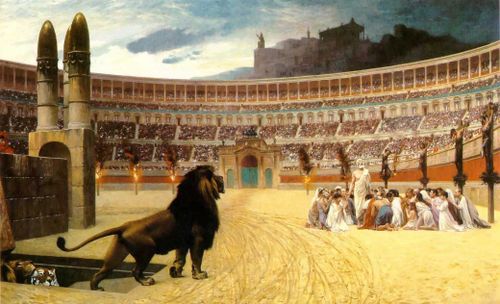 A common theme in the stories of faithful martyrs is that they die due to their allegiance to Jesus Christ. Those who are loyal to Him are seen as a threat to earthly kings and kingdoms. The early church father Tertullian testifies to this fact in The Apology: “It becomes evident that the crime laid to our charge consists not of any sinful conduct, but lies wholly in our name. If, indeed, any real crimes were clearly adducible against us, their very names would condemn us, if found applicable, so that distinct sentences would be pronounced against us in this wise: Let that murderer, or that … criminal, or whatever it be that we are charged with, be led to execution, be crucified, or be thrown to the beasts. Your sentences, however, import only that one has confessed himself a Christian. … Surely, surely, names are not things which deserve punishment by the sword, or the cross, or the beasts.”

While acknowledging the authority of governments, Christians look to a higher authority that ultimately requires us to obey God rather than man when the two are in conflict (Acts 5:29). The Christian continues to witness even if it is illegal to witness and will continue taking Bibles to believers even if Bibles are banned. It is a matter of priorities. God’s priorities.