« What If You Had Nothing | Main | Questions to Ask Muslims about the Bible, Part 1 »

However, I consider my life worth nothing to me, if only I may finish the race and complete the task the Lord Jesus has given me— the task of testifying to the gospel of God’s grace.  Acts 20:24

Paul wrote to Timothy, “Fight the good fight of the faith. Take hold of the eternal life to which you have been called” (1 Timothy 6:12). He was familiar with the fight. 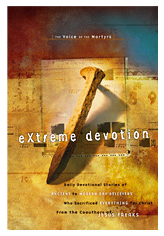 He described some of his experiences to the Corinthians: “In great endurance; in troubles, hardships and distresses; in beatings, imprisonments and riots; in hard work, sleepless nights and hunger . . . dying, and yet we live on; beaten, and yet not killed; sorrowful, yet always rejoicing; poor, yet making many rich; having nothing, and yet possessing everything” (2 Corinthians 6:4–5; 9–10).

While in jail with a death sentence, Paul wrote to the Philippians, “For to me, to live is Christ and to die is gain. If I am to go on living in the body, this will mean fruitful labor for me . . . I am torn between the two: I desire to depart and be with Christ, which is better by far; but it is more necessary for you that I remain in the body. Convinced of this, I know that I will remain, and I will continue with all of you for your progress and joy in the faith” (Philippians 1:21–25).

Some years later, however, he wrote Timothy, “I have fought the good fight, I have finished the race, I have kept the faith” (2 Timothy 4:7). In Rome at the age of sixty-four, Paul was beheaded by the order of Emperor Nero and went to be with Jesus.

If ever we need inspiration to continue on in the face of suffering, we need look no further than the life of Paul. Paul’s endurance race began with trouble from the get-go. He coursed through a myriad of hair-raising experiences recorded in the book of Acts. Yet he considered all that he endured nothing compared to knowing Jesus and making him known. Are you able to say the same thing as Paul when it comes to suffering? Is nothing able to deter you from your goal of knowing Christ and making him known? If you fear you are on you last lap of faithful service, take heed of Paul’s encouraging words and get your second wind.

This is one of the readings from the book, Extreme Devotion, available from VOM’s online bookstore. You can also receive devotional thoughts daily via email or read them each day in VOM’s Pray Today App for your smart phone or tablet.