The prayer focus for Secret Church this year was on the nation of India. Why choose India? India’s 1.2 billion people include members of all of the world’s major religions, and the country also been a hotspot for Christian persecution in recent years. 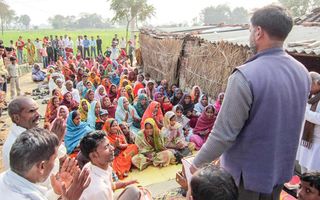 Though there are Muslims, Christians, Sikhs and Buddhists in India, more than 80 percent of the population is Hindu. For many Indians, to be Indian is also to be Hindu. Hindu radical groups throughout the country reinforce this notion by beating Christians, burning churches, trying to force believers to undergo Hindu reconversion ceremonies and throwing Christians in prison. Many pastors and evangelists have also been killed.

The rise in persecution at the hands of Hindu nationalists is related in part to the nationalists’ perceived fears of “loosing” India. They see Christianity spreading and offering hope to people trapped in a caste system. They see the gospel giving Indians a way to know God by his grace only, not by works.

Please pray with us for India. Believers there know to expect persecution. Pray that they will remain bold. Pray that they will stay faithful during persecution, and that they would share the gospel with their neighbors without fear. Pray for good teaching and good leadership to help train new believers in their faith, so they grow deep roots that will sustain them in difficult times.

And pray for the persecutors: members of government, community members and family members, who make things difficult for new believers. Pray that the Holy Spirit opens their eyes to the truth about Hinduism and to the goodness of our loving God. We’ve heard many testimonies about Hindu extremists who’ve been completely changed through Jesus; pray for more of these conversions.

Dory P. has worked with VOM for nine years. Dory tells the stories of the persecuted through VOM's newsletter, and her husband serves in VOM's international department. Between Dory, her husband, five-year-old son and two-year-old daughter, the family shares seven passports, though they know their ultimate citizenship is in heaven.