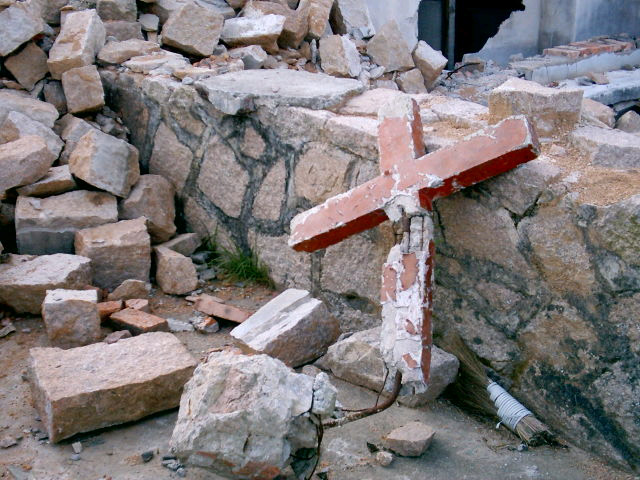 In the front section of the New York Times on Sunday was a story on the ongoing destruction of churches and removal of crosses from church buildings. The article says as many as 1700 crosses have been taken down in the past two years in Zhejiang Province; Bob Fu, president of China Aid Association, told VOM Radio the number may be even higher.

A portion of the Times article explores the pressure being brought to bear on China’s Christians—even those who are part of the State-sanctioned, registered church:

As the authorities pressed the campaign [to remove church crosses], prominent Protestant and Catholic leaders across China, including senior figures in the government’s religious affairs bureaucracy, spoke out against it in sermons and on social media.

One of them was Gu Yuese, the pastor of one of the biggest churches in the Chinese-speaking world, the Chongyi Church in the provincial capital of Hangzhou. As one of the best-known Protestant leaders in China, Mr. Gu was influential, and his criticism resonated beyond the region.

“These actions are a flagrant violation of the policy of religious freedom that the party and the government have been implementing and continuously perfecting for more than 60 years,” he wrote in a statement released on official government letterhead.

Then he was silenced. In January, the police detained Mr. Gu and charged him with misusing church funds. A few days later, another pastor in Zhejiang who had also spoken out was detained on similar charges.

“It’s a method to make us pay attention,” said the pastor of a government-run church in Wenzhou. “None of us have financial training, so if you send in an accountant, they will probably find something wrong.”

Several clergy members in the region said they were under pressure to demonstrate their loyalty to the Communist Party. Some churches, for example, have begun extolling Mr. Xi’s campaign to promote “core socialist values” — a slogan meant to offer a secular belief system that bolsters the party’s legitimacy.

Other churches have begun displaying their building permits, implicitly endorsing the government’s authority to approve or reject church construction, including crosses.

“We have to show that we are loyal Christians,” said an employee of the historic Chengxi Church in Wenzhou, “or else we could face trouble.”

Please pray for our Christian brothers and sisters in China, that they will remain faithful to Christ in spite of the threat of trouble. Pray also that government leaders and local officials will come to know Christ in a personal way.