Finding God in a Refugee Camp

“Be careful! Slow down!” I call to the young Syrian refugee girl as she dashes after her friend, stumbling over rocks and trash as she goes. Not that she could understand my English; they all spoke only Arabic.

We’d had an interesting time explaining the game of “Duck, Duck, Goose” to the group of 20-plus refugee girls without a translator. They seemed to have caught on well, though, even if we did have to play the game standing up instead of sitting. There wasn’t enough room to sit between the tents, and the ground was littered with trash and sharp rocks.

My husband and I were with a Syrian VOM partner, “Samir,” at one of the schools they had opened for children in a refugee camp. My husband took the boys and I took the girls, and we played games until their lunch arrived. For many of them, I was told, the school-provided lunch was all they would eat that day. 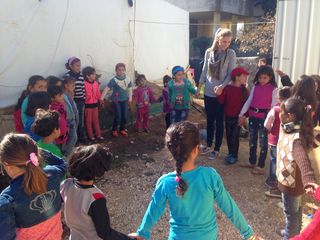 The girls’ high-pitched laughter was contagious as they continued around the circle. “Daa, Daa, Gahh!” It didn’t quite sound like “Duck, Duck, Goose,” but throughout the rest of the afternoon, the girls had a great time patting each other’s heads and yelling “Gahh!” For a moment, they seemed to have forgotten they were refugees, that they have constant runny noses, dirty clothes, and have seen and experienced far too much for their young age.

On our way to the camp earlier that day, we passed multiple checkpoints. Samir told us that a month earlier a suicide bomber had blown himself up at one of those checkpoints. He explained that even though the Syrian refugees are now away from the immediate danger of ISIS and other radical groups, they are still not in a good situation. The children aren’t allowed to go to the country’s schools, the adults aren’t allowed to work and, being so close to the Syrian border, they are still exposed to kidnappings and other violence.

Samir then told us that all of this has provided an opportunity for Christians to reach out to Muslims with the love of Christ like never before. That’s why they have opened a school in the refugee camp. The school welcomes both Muslim and Christian refugee children, giving them the only sense of normalcy they have in the camp, even if “school” is in a tent. They are taught the Good News of Jesus, and Muslim parents and guardians who see Christians as the only ones caring for their children also become curious, asking Samir to meet with them and tell them about this Jesus.

I left the refugee camp knowing one thing for certain: God’s light is breaking through the darkest places, and He is doing it through His church — the body of Christ of which we’re a part. I’m honored to be in the same family as some of these incredible men and women of God. They value their pursuit of Christ’s calling over their safety or security. Samir knows he puts himself and his family at risk every time he goes to the refugee camp, boldly sharing the love of Christ with Muslims.

With everything we have heard about the Syrian refugee crisis, with everything we are hearing about terrorism and about ISIS, it’s important for us to remember that our God is never in crisis, that Jesus’ kingdom never falters or is afraid. Samir and his wife believe that when Jesus said, “Go and make disciples” that this is what He meant. “How could I not go?” Samir asked pointedly.

I could have left that trip wondering if I should even call myself a Christian compared with someone like Samir. But instead, I was inspired that this is who we are called to be as Christians, to “go and make disciples.” We are all a part of this kingdom; we are all ambassadors of Christ’s hope, love and freedom. When the world cries in confusion, turmoil and despair, we can remain steadfast because we know that our God is bigger, that His love is stronger than death and that there is always victory in Christ … even in a dirty refugee camp.

Brooke Parks serves on the staff of VOM as the leader for women’s ministry and student outreach. She has worked in 16 different countries and is passionate about helping expand God’s kingdom throughout the world.