When I traveled to Nigeria last May, I knew I would encounter stories that were both horrific and hopeful, but nothing could have prepared me for what happened to then 13-year-old Danjuma Shakuru — or how he responded to it. 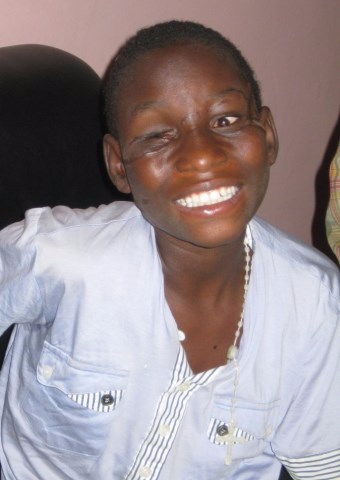 On Jan. 28, 2015, Islamic militants attacked Danjuma’s village, burning homes and killing 23 people. One insurgent attacked Danjuma with a machete, slicing through the left side of his head. The boy lost consciousness, but the attackers weren’t done. Among other gruesome injuries he sustained, they also cut out his right eye. The trauma from the attack left Danjuma unable to distinguish any light in his left eye.

What Danjuma endured was so brutal that villagers dug a grave for him. But his grave is empty, because Danjuma survived.

As he shared his few memories of the attack with me in May 2015, Danjuma constantly smiled. The joy, he said, comes from the Lord, who has also helped him forgive his attackers.

“I forgive them because they don’t know what they are doing,” he said, echoing the words of Christ on the cross. “If they had love, they wouldn’t behave that way.”

We published Danjuma’s story in our August 2015 newsletter and many readers were moved by his faith and ability to forgive those who horribly mutilated his body. Using cards that were included with the newsletter, readers had the opportunity to write letters of encouragement to our persecuted brothers and sisters in Nigeria. Many of you chose to write letters specifically to Danjuma, which a VOM worker then hand delivered to him. Though he’s unable to see the cards, Danjuma’s constant smile grew even bigger knowing those who have read his story are continuing to pray for him.

Since the attack, VOM has worked to ensure that Danjuma’s life is as whole as it can be, helping with medical costs and assisting his mother with care.

Today, Danjuma is learning to use a walking stick and he’ll soon be attending a school for the blind to learn Braille. In the near future, he’ll undergo a surgery for his left eye, but it is unclear whether he will regain any vision.

Darren Sanders is a writer on staff with VOM. He learned about VOM as a teenager after reading Jesus Freaks and began receiving the newsletter. He continues to be inspired by those living out their faith despite persecution.