In the early morning hours of Feb. 23, 2015, guards in the Assyrian Christian villages along the Khabur River in northern Syria left for duty in Hassaka. An hour later, ISIS militants burst into the homes of villagers, taking hundreds of men, women, and children as captives.

In one village, ISIS militants forced 21 people into a small room. Most in the group were men, but there were a few women, including one man’s aunt and his six-year-old daughter, Mariana. For three hours, they listened to gun battles and explosions just across the river as ISIS militants battled with Assyrian soldiers and Kurdish forces. It was not clear what the extremists intended to do. Death seemed imminent. 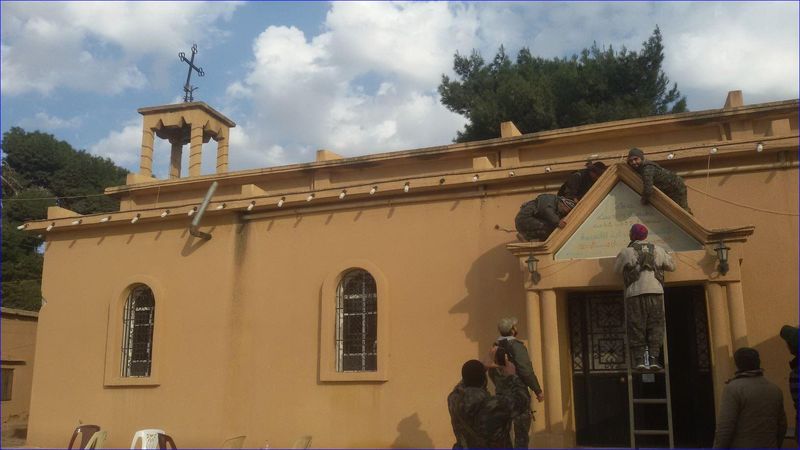 Caption: In the weeks before the attack, ISIS fighters told the villages to remove the crosses from their churches. After crosses came down, some of the men defied the Islamic extremists and put the crosses back on top of their churches.

During a lull in the fighting, the Christians hear the village church bell ring three times. It gave them hope that God was still with them.

Immediately, their ISIS guards became fearful and demanded to know who else was in the village. No one could explain why the church bell rang. Thousands of those who once lived in these villages had already left, and only 3,000 or so remained. Taking no chances, ISIS loaded group into trucks and took them into the mountains. Eventually the Islamic extremists would bring 253 hostages into this area. Nearly every day, the ISIS fighters pressured the Christians to convert to Islam.

The Islamic extremists began negotiations to exchange the hostages for ransom almost immediately. Within a week, the 21 who were held in the room were among the first to be released. However, just as they were releasing the hostages, the extremists decided to keep 6-year-old Mariana. Her father and great aunt pleaded with the extremists, who tried to force them to leave without the girl. Finally, the men relented and told the father to bring more money for his daughter’s release, and they allowed Mariana’s great aunt to stay as her guardian.

Mariana and her great aunt were eventually released along with around 30 of the others after ransoms were paid.

ISIS demanded nearly $10 million dollars for the remaining hostages, then believed to be about 202 people. The Assyrian Christians remained committed to their faith. None of them would convert to Islam, despite the pressure to do so.

On Feb. 22 of this year, following their year-long captivity with ISIS militants as their guards, the last of hostages from the Khabur River region were released. The 43 men, women, and children are thankful for all the Lord has done.

They ask that Christians remember them in prayer. While all of those who were taken captive from the villages along the river are accounted for, there are still hundreds of missing Assyrian Christians who have been taken from other villages. More than 200 were taken from another village in Qaratyain, Syria this past August. They too, need Christian brothers and sisters who will not allow them to suffer in silence and will stand with them in prayer for their faithfulness, courage, and perseverance.