Happy New Year! This week on the Persecution Blog we have been looking back at the top six most-read stories of 2015, based on the posts that created the most traffic throughout the year.

Today we look back at the most-read post of the year. If you’ve been following the countdown this week, the topic of this top post won’t surprise you. It’s another post sharing the real person, a persecuted Christian, behind the story of a holiday hero: St. Patrick.

Which post on Persecution Blog challenged or blessed you the most this year? We’d love to hear your thoughts in the comments below.

Today is St. Patrick’s Day, a day Americans focus on good luck and all things Irish. But most of those celebrating don't know that the man for whom this day is named was a Christian persecuted because of his Christian actions.

The following comes from "A Note from the Author to Parents and Educators" that is included in The Story of St. Patrick: More Than Shamrocks and Leprechauns, a book for children published by VOM that tells the true story of St. Patrick’s Day.

Many celebrate Saint Patrick's Day on March 17th and hang pictures of shamrocks and mythical creatures called leprechauns. But who was St. Patrick, and why do we celebrate his life on this day?

Patrick lived a full life, but not without his share of suffering and adventure. He was born in Britain, in the fourth century A.D., during a time of great uncertainty for the Roman Empire. The Roman legions that once protected civilized Britain from barbaric invaders were called away to defend themselves in other regions of the Roman Empire. Therefore, Britain was left vulnerable to attacks. 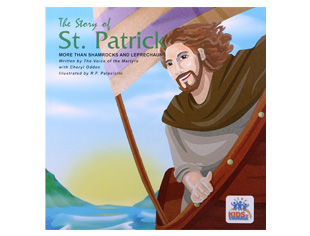 Just before Patrick turned 16 years of age, he and his family were at their holiday villa by the sea, located outside the town of Bannaventa Berniae when Irish  pirates attacked it just before dawn. (Some say the villa was attacked during the day while Patrick played on the beach. Although Patrick's family escaped, Patrick and many of the family's workers did not; and soon they were en route to Ireland, where Patrick was sold as a slave to Miliuc of Slemich, a Druid tribal chieftain.

Patrick was given the task of a herdsman. Though raised in a Christian home (his father, Calpornius, was a civil magistrate and tax collector, as well as a church deacon), Patrick never made a decision to follow Christ until he was kidnapped and made a slave. In his autobiography called Confessions, Patrick wrote: “…‘the Lord opened my senses to my unbelief,’ so that though late in the day, I might remember my many sins; and accordingly ‘I might turn to the Lord my God with all my heart.’” He also wrote about how his faith in God grew as he prayed to Him while he shepherded the flocks: “But after l had come to Ireland, it was then that I was made to shepherd the flocks day after day, and, as l did so, I would pray all the time, right through the day. More and more the love of God and fear of him grew strong within me, and as my faith grew, so the Spirit became more and more active... In snow, in frost, in rain, I would hardly notice any discomfort, and I was never slack but always full of energy. It is clear to me now, that this was due to. . .the Spirit within me.”

But Patricks devotion to God did not go unnoticed. He soon earned the nickname "Holy Boy" among his fellow slaves.

One night Patrick had a dream, and in it he heard a voice saying do him, "You are right to fast, soon you will be returning to your own country." In another dream he received a response to the first dream, being told, “Come and see where your ship is waiting for you.” At the age of 22, Patrick escaped and traveled 200 miles to the coast of Ireland. Of his long journey across Ireland, he wrote: "I turned on my heel and ran away, leaving behind the man to whom I had been bound for six years. Yet I came away from him in the power of God, for it was he who was guiding my every step for the best. And so I felt not the least anxiety until I reached the ship.

When Patrick approached one of the men on the ship that was on the coast, he asked to board. The seaman scowled at him, so Patrick began to leave when the man called back to him, saying the other men wanted him on board as a passenger. Patrick wrote. "In spite of this, I still hoped that they might come to have faith in Jesus Christ."

The journey by boat was long, including a stop on land where they journeyed for 28 days. After having run out of food, the captain turned to Patrick and challenged him to ask his God for food. Glad to oblige, Patrick responded: "Turn trustingly to the Lord who is my God and put your faith in him with all your heart, because nothing is impossible to him. On this day, he will send us food sufficient for our journey, because for him there is abundance everywhere." According to Patrick’s autobiography, when the men turned around, a herd of pigs was standing before them. They feasted for days and gave thanks to God.

Two years later Patrick finally made it to his beloved Britain and into the arms of his mother and father who pled with him never to leave them again. Patrick began to settle back into his life in Britain and studied to become a priest and bishop. But one night Patrick had a dream of a man who seemed to come from Ireland and was carrying a letter with the words “The Voice of the Irish.” As Patrick began to read the words, he seemed to hear the voice of the same men he worked with as if they were shouting, “Holy broth of a boy, we beg you, come back and walk once more among us.”

But Patrick's plans to return to Ireland—the land of his captivity—were fiercely opposed by both his parents and the church leaders who, by the way, did not think the Druids were worth saving. His family shuddered at the thought of him returning to barbaric Ireland with the gospel, as the Druids were known to weave criminals and runaway  slaves into giant wicker baskets and suspend them over a fire. Of this opposition Patrick later wrote; “So at last I came here to the Irish gentiles to preach the gospel. And now I had to endure insults from unbelievers, to ‘hear criticism of my journeys’ and suffer many persecutions ‘even to the point of chains.’…And should I prove worthy, I am ready and willing to give up my own life, without hesitation, for his name…There was always someone talking behind my back and whispering, ‘Why does he want to put himself in such danger among his enemies who do not know God?’” Patrick had to sell his title of nobility in order to become the “slave of Christ serving the barbaric nation.”

While Patrick was in Ireland, he shared the gospel with his former slave owner, Miliuc the Druid. But instead of turning his back on his pagan gods, Miliuc locked himself in his house and set it on fire while Patrick stood outside the house and pled with him to turn to Christ. It is said Miliuc drowned out Patrick’s pleadings by crying out to his false gods.

But Miliuc's refusal to hear the gospel was just the beginning of Patrick’s challenges with the Druids as he spread the gospel across Ireland and taught the people how to read and write. One story that some believe is legend mentions Patrick challenging the Druid wizards in 433 A.D., on the vernal equinox, which occurred on Easter Sunday that year. Patrick challenged the wizards' power of control by starting a bonfire, which was central to the Druids’ ritual, on a hillside opposite of the barbaric idol-worshippers. Patrick was dragged before the Druid council where he had the opportunity to share about Jesus, the light of the world. Some Druids believed, and others tried to kill him.

Patrick continued his journey across Ireland. He preached at racetracks and other places of worldly indulgences, seeing many come to Christ. However, this was not without opposition. The Druids often tried to poison him. One time a barbarian warrior speared Patrick’s chariot driver to death in an attempt to kill Patrick. He was often ambushed at his evangelistic events, and it is noted that he was enslaved again for a short time. He had to purchase safe passage through a hostile warlord's land in order to continue on his journey. Another time Patrick and his companions were taken as prisoners and were going to be killed, but they were later released. In Confessions, Patrick wrote, “As every day arrives, I expect either sudden death or deception or being taken back as a slave or some such other misfortune. But I fear none of these, since I look to the promise of heaven and have flung myself into the hands of the all-powerful God, who rules as Lord everywhere.”

Patrick journeyed throughout Ireland, sharing Christ until his death on March 17th, around the year 461 A.D. Later Irish mythological creatures known as leprechauns would creep into the holiday celebrations, as well as the symbol of the shamrock, believed to have been used by Patrick to illustrate the Trinity as he preached and taught. Some legends have circulated stating Patrick drove all the snakes out of Ireland. Since there are no snakes in Ireland and snakes often symbolize the devil and evil, many believe the "snakes" were a metaphor representing his work of driving the idol-worshipping Druid cult out of the country.

Enslavement, torture, imprisonment and death for one's faith in Christ were not confined to Patrick’s lifetime. Today Christians in communist nations like China, Vietnam and Cuba are imprisoned if caught sharing the gospel with fellow countrymen. In Sudan, a Christian boy named Demare was kidnapped by militant Muslims and sold as a slave. And in Vietnam, when members of some tribal groups have come to Christ, they destroy the altars used to pray to their dead ancestors. When fellow villagers and even members of the government hear about this, these new believers in Christ are harassed and some even imprisoned for turning away from their empty religions of idol and ancestor worship.

We may never be enslaved, imprisoned or beaten because of our faith in Christ, but many may make fun of us for believing in Jesus’ promise of heaven and placing our faith in a God they do not see with their eyes and cannot touch with their hands. I pray this version of Patrick’s courageous life will inspire you to stand firm in Christ and stand strong for Him as you tell others about the greatest gift we can ever be given—salvation through Jesus!