Persecution Blog: A Prisoner's Hope: "We Are Never Alone"

A Prisoner's Hope: "We Are Never Alone"

“On a Sunday morning, I walked towards my church and mused about the sermon, which I would have to deliver…while I was debating with Jesus the sermon, which I had to deliver after half an hour, at once a car of the secret police stopped near me, four men rushed out of the car, in a minute’s time, I was in the car, I was handcuffed, I was blindfolded. And now, I was under arrest.” 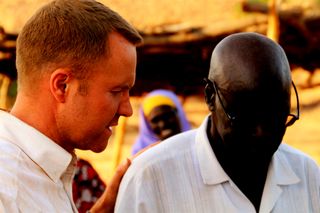 As Richard Wurmbrand shared this story at the Royal Festival Hall in London, on April 13, 1969, he invited the listeners to enter into a dark world. He continued, “And now, in our imagination, let us all leave this hall. You descend with me blindfolded down some slippery stair, I do not know where I am led. A door opens before me. The blindfold is taken away. I am pushed in. The door is banged after me, it is locked. And now, Jesus is no more simply at the door; he is at a locked door, which I cannot unlock.”

He asked the spellbound audience: “What would be your first feeling, if such a thing would happen to you? I can tell you what happened to me first: I trembled. We knew already, how the communists behave towards prisoners. It is not only beatings, whippings, but refined tortures, cruelties, and dopings. And I feared that under these atrocities, my faith might break, I might become a traitor to the Church.”

These words provide a window into the soul of a frightened prisoner and the deep questions that each one of us would face when confronted with an unjust imprisonment. It is a space of denial, fear and loneliness. However, as believers, we have an assurance that can never be taken away.

Richard continued his speech, “You are alone in a cell; they meant you to be alone.”

Right now. Today. This very moment, there are Christians who are facing the same denial, fear and loneliness. I have personally encountered, and prayed with, Christians in Asia and Africa who have spent years in prison, facing unimaginable tortures.

Even in these dark moments, Scripture reminds us that we are never alone. When Joseph was placed in a dark prison cell, the Lord was with him: “Then Joseph’s master took him and put him into the prison, a place where the king’s prisoners were confined. And he was there in the prison. But the Lord was with Joseph and showed him mercy, and He gave him favor in the sight of the keeper of the prison” (Genesis 39:20-21).

Will you join me today in praying specifically for those who are in prison right now because of their faith? Let’s pray that they will sense the deep comfort of God’s presence with them, that they will experience His mercy and that they will find favor in the eyes of those who have detained them.

We are never alone.

Dr. Jason Peters serves as Associate Vice President of Connection for The Voice of the Martyrs (VOM). As a global voice for our persecuted family members, Dr. Peters travels frequently to meet face-to-face with persecuted believers around the world, leads VOM’s outreach initiatives, including media development, special events, public relations, and oversees hundreds of speakers and representatives. Peters was Executive Editor of I Am N: Stories of Christians Facing Islamic Extremism and Host/Producer of the I Am N video curriculum (David C Cook, March 2016). He has ministered in 40 countries, as diverse as Sudan, Cuba, Nepal, Saudi Arabia, Kyrgyzstan, Iraq, Sri Lanka, Egypt, Bangladesh and Nigeria. Jason and his wife Kimberly ministered overseas for several years, where two of their five children were born.