Recently a college friend asked my opinion about Syrian refugees and whether or not the US should allow them in. In recent weeks—especially since the Paris attacks—there has been much ado about Syrian refugees coming in, and how they are being screened, and the security concerns raised by allowing thousands of people from the war-torn Middle East into our nation. “What is the right thing for us as Christians to do?” my friend asked, crediting me with a lot more expertise than I actually possess.

I am not running for President and I’m glad that I don’t have to lay out a plan that tries to answer every question and every security concern. But as I have watched the news reports, read the angry Facebook posts and thought about what the right response is, I’ve been reminded of three things:

The first thing I thought of was the story in Matthew 25 about who Jesus welcomes into eternity with Him and who he turns away. To those He invites into paradise He says:

“Then the King will say to those on His right hand, ‘Come, you blessed of My Father, inherit the kingdom prepared for you from the foundation of the world: for I was hungry and you gave Me food; I was thirsty and you gave Me drink; I was a stranger and you took Me in; I was naked and you clothed Me; I was sick and you visited Me; I was in prison and you came to Me.’” (Mat. 25:34-36)

A few verses later, He explains to those He is turning away why they will not be welcomed into His presence, including that “I was a stranger and you did not take Me in” (v. 43).

As we think about refugees, this story seems to make imminently clear which response Jesus will honor. 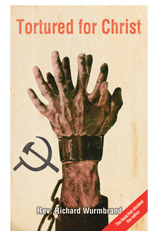 The second thing I thought of was the story of Richard Wurmbrand, as he tells it in his best-selling book, Tortured For Christ. Richard had a great heart, after he committed his life to Christ, to reach Russians with the gospel message that had transformed him. “For me,” he wrote, “to preach the Gospel to Russians is heaven on earth.”

When a million Russian soldiers were sent in by their communist masters to occupy Wurmbrand’s native Romania, he didn’t protest the illegality or hunker down to ensure the safety of his family and church. Instead, Wurmbrand saw these one million armed men as a divine answer to his prayer! He loved to minister to Russians and had asked God to open the door for him to minister to more, and now ONE MILLION RUSSIANS were inside his country, within easy reach! Praise the Lord for this miracle!

I wonder how many Christians have asked God to open doors for them to minister to Muslims and share with them the LOVE of Jehovah God (something that is not offered by Allah of the Quran)? Is it possible refugees fleeing the chaos of their nation, and having seen up-close the darkness of Islam, might be God’s miraculous answer to some of those prayers?

The third thing I thought of was a message I heard from Joel Rosenberg, author and astute Christian thinker, one of the people I trust when it comes to Middle Eastern affairs. Earlier this year I had the privilege of hearing Rosenberg speak at the National Religious Broadcasters conference.

Rosenberg made a statement that wasn’t about refugees; he was talking about the Islamic State. “We need to defeat [ISIS] as enemies as a government,” Rosenberg said. “And we need to love them as enemies as a church.”

I was reminded of Rosenberg’s statement when thinking about refugees because I believe his statement shows that there are different responses from a government perspective than from a church or Christian perspective. Our government leaders take an oath “to protect and defend the Constitution of the United States of America.” They have a responsibility to that oath, and in thinking about refugees they must think about the safety of American citizens and the need to carefully screen those whom America welcomes within her borders.

As followers of Christ we are loyal to our nation and pray for our leaders. We also hear Christ’s call for us to love our “enemies” and we know that our ultimate citizenship is not in the United States, but in a heavenly country (Heb. 11:16).

I’m not running for President. I don’t have any wish for a radical Islamic terrorist to move in next door to me. But I do want to honor Christ. I do want to be among those He invites into eternity with Him.

There are “strangers” coming out of the Middle East. They are fleeing chaos and war and terror. Some are fleeing persecution. Most see no hope for themselves in their country, or even the region.

I don’t see how, as Christ followers, we can close our ears to the refugees’ cry and our doors to their knock.

Todd Nettleton has served with The Voice of the Martyrs for 17 years. He’s travelled to more than 20 restricted and hostile nations and interviewed hundreds of believers who’ve faced persecution for their Christian witness. As VOM’s principle media spokesperson, Todd has done more than 2,000 interviews with media outlets ranging from Moody Radio to the BBC and Los Angeles Times. He is the principle author of Restricted Nations: North Korea and was part of the writing team for four other VOM books. In 2014 VOM launched a weekly, half-hour radio show with Todd as the host.