J. Christiaan Beker’s suffering and persecution came at the hands of German occupation forces of the Netherlands in World War II. Beker later immigrated to the United States to become a professor of New Testament at Princeton Theological Seminary. He died in 1999. While not specifically suffering for Christ’s sake, he suffered at the hands of those who were idolatrous, adhering to the false religion of Naziism. This experience led him to investigate the meaning of suffering, not only because of the emotional and psychological damage done to him but also theologically. The “mystery of suffering” must somehow be reconciled with the Christian belief in “the goodness of the good creation.” 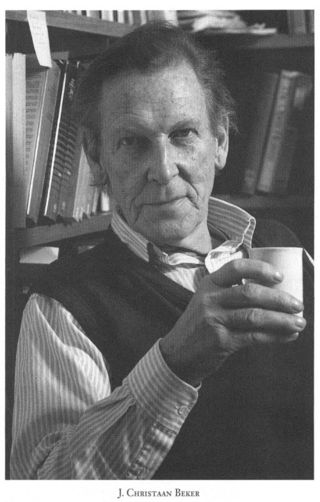 While Beker’s theology is not a full-fledged theology of suffering, he touches on some themes that are relevant to our topic. A summary statement of his theology might be “facing the reality of suffering but always with apocalyptic hope.” Beker’s passion is to reconcile seemingly contradictory or paradoxical ideas in the Bible related to suffering and God. How do you reconcile “the mystery of suffering” with the goodness of creation? Or, how do you reconcile invisible hope with concrete reality?

He begins with some foundational themes that help guide his thinking and set the parameters for his thought. The first is the meaning of apocalypse. It does not mean, as it the popular usage of the term, the doom of total destruction and the annihilation of mankind and total destruction of the universe; but is a time of the reversal of evil and the transformation of humanity and creation where God is finally and fully revealed.

The second theme has to do with the ‘normative pattern’ for Christians, which should be derived from the gospel. The present suffering of the church and the world is set in the context of hope in the triumph of God.

The third theme is the dogma of retribution which constitutes the basic moral order of the universe. If you do good, you will be blessed; if you do evil you will be punished. It is the substance of justice. But, it is not the last word. God has introduced mercy for those who do evil. What is not taken into account, says Beker, is the fact that the righteous could and would suffer. In fact, it would become a way in which God would seek to redeem the world. Sufferings and tribulations are really penultimate realities. They will not be permanent, not the ultimate, defining reality. Suffering, Beker believes, comes at the hands of human injustice which has its ultimate source in idolatry. “Idolatry,” he says, “is the source of absolute ideologies, human illusions, and pretensions” (61). He suffered at the hands of idolaters.

Beker takes up the question of theodicy, or the defense of a good God in the face of the reality of evil. For Beker, it is the question of tragic suffering that afflicts the innocent for no apparent reason that is an issue for him. Actually, God hates suffering, he says, and it is alien to his coming kingdom. The implication is that he allows it now for his own providential reasons.

So, whether we are facing persecution or trying to live a Christian life in a world hostile to Christian values, Beker has some substantive thoughts for us to consider and incorporate into our lives.