« Exterminating Christians | Main | "God Had Their Back" » 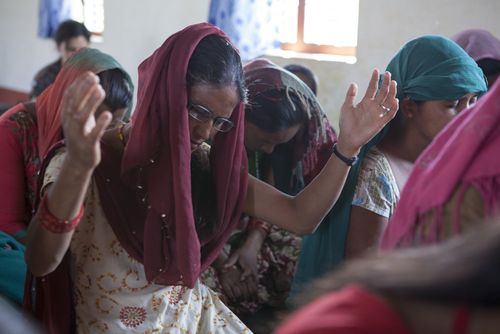 Today in Nepal, a Christian woman can legally share her faith and a Hindu man can openly give his life to Christ.

However, their right to do these things could soon vanish. If a draft for a new constitution is approved, Nepal could move from a secular state to a Hindu state and Christians caught in these activities could be arrested.

“Current updates indicate that Nepal will most likely remain a secular state, but nothing is absolute certain until the constitution comes out,” said a VOM partner in the country. “Many are still pushing for language in the constitution that would make conversion or sharing ones beliefs illegal, and in some parts of the country, traditionalists cling to cultural values that pose a threat to religious freedom.”

A vote on the new constitution – originally drafted in 2008 after a 240-year-old Hindu monarchy was abolished and Nepal was declared a secular republic – has been repeatedly delayed. However, as the country continues to rebuild from two devastating earthquakes that killed nearly 9,000 people earlier this year, many are wanting a new constitution quickly.

Nepali citizens have protested the draft’s proposal for the creation of federal states, while critics globally have decried the draft’s restrictions on religious freedom, specifically clause 3 of Article 31. It reads, ”In exercising the right entrusted by this article, any act which may be contrary to public health, public decency or morality or incitement to breach public peace or act to convert another person from one religion to another or any act or behavior to undermine or jeopardize the religion of each other is not allowed and such act shall be punishable by law.”

If implemented, this would make it illegal to change one’s religion, to share one’s religion or even explain one’s religion. To pass, it would need to be approved by a two-thirds majority of the Constituent Assembly. Once that is reached, the speaker of the assembly would sign the new constitution and it would be presented to the country in an official ceremony led by the president.

“It is not certain yet whether the constitution will be promulgated, and if it does not come out then many people expect heightened tensions and even violence in the country,” the partner said. “Pray for peace in Nepal and for the Constituent Assembly, and for political parties to reach agreements during this time.”

Regardless of what happens, it will likely remain shameful for a family member to become a Christian in many parts of Nepal. Since converts can no longer participate in family traditions that go against Biblical teaching, family members are often ostracized from their communities, sometimes even kicked out of their home.

“Maybe in Kathmandu they have laws about religious freedom, but here we have our own laws,” a local police officer in west Nepal recently said. “You cannot share your beliefs here.”

“Persecution of Christians will most likely continue in Nepal, so please pray against the heightened amount of anti-Christian rhetoric and the increase in persecution from Hindu fanatical groups,” Our VOM partner added. “Pray for perseverance for the believers who are the only Christian in their family, and for those who have been rejected for their faith by family and friends.”