In a stunning and controversial announcement on Aug. 5, a judge in Sudan ruled that two South Sudanese church leaders would not face execution for their crimes. Following eight months of waiting for an outcome, Pastor Yat Michael and Pastor Peter Yen were charged with less serious convictions, given credit for time served and told that they could go home.

I celebrated in my office and shared the good news with several coworkers and friends. One coworker said it best, “The judge may have successfully split the baby.” 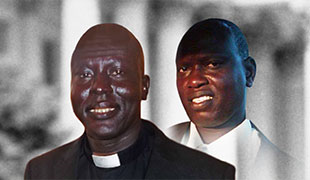 Under pressure from two sides, the Sudanese judge was forced to carefully navigate local expectations by upholding Islamic law as well as appease the international call for human rights. Both pastors were facing charges of “spying” and “undermining the constitutional system.” Each charge is punishable by death, life imprisonment, or prison and confiscation of property. With one side calling for death, it was difficult to speculate what the outcome might be.

The announcement that the men were not charged with either of these crimes was surprising. Given that the government has steadily persecuted Christians through both legal channels and violent attacks, it seems like a revolutionary change of heart.

Last year, Meriam Ibrahim was on trial for apostasy and sentenced to death. Jailed with her then twenty-month-old son, she was still shackled by the ankles when she gave birth to her second child, Maya. The birth of this child began a countdown to Meriam’s death sentence. Once Meriam had weaned her children, Sudan was free to carry out her execution. Her case raised an international uproar.

Though a judge in Sudan pardoned the woman, the celebration was interrupted by Sudan’s National Intelligence and Security Service (NISS) who kept her from leaving. They claimed she did not have the appropriate travel documents. A nearly one-month battle ensued before the family was able to flee the country.

In a similar turn of events, both Pastor Yat Michael and Pastor Peter Yen and their families were prevented from leaving the Khartoum airport on Aug. 6. Authorities kept them from boarding the plane. The attorney swiftly took action and went back to the judge, but a meeting could not be arranged for three more days. It was unclear who had issued the ban, and if it was the NISS, things would not be easy. Whether the NISS, led by hardline Islamists, would allow the men that they arrested to leave the country was of deep concern.

A relative of one of the pastors shared, “your prayers are very needed.”

According to the latest information, it may take a few more days before the pastors and their families will be able to leave Sudan. The pastors’ attorney has been informed that the prosecution initiated the travel ban, giving the judge the authority and jurisdiction to lift the ban. If all goes well, the two Christian pastors and their families will be allowed to leave Sudan within the next couple of days.

"Ann Kay” is a writer for VOM. She learned about VOM five years ago when she read Tortured for Christ and began receiving the newsletter. She is passionate about reaching the world for Christ and sharing stories of the persecuted church.