Today marks the end of an era for one of our media partners and one of my media friends. After almost 20 years, Mission Network News producer and anchor Greg Yoder is stepping away from the MNN microphone to take on the role of executive director of Keys for Kids Ministries (formerly Children's Bible Hour). 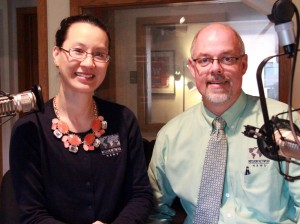 I didn’t keep records of my media interviews during my first months at VOM. But at the beginning of 1999 I began to jot the date, topic and interviewer for each media interview I did. The first one I have record of is an interview with Mission Network News. The first time Greg’s name shows up in my records was a few months later, on May 7, 1999. We talked about charges being dropped against a Christian in Pakistan—a case VOM followed closely.

I’ve now done more than 2,250 media interviews on behalf of VOM and our persecuted family. I don’t know how many of those were with Mission Network News, but I know it is many. Friends and family often say to me, “I heard you on the radio….”and when I dig into where they heard me or what interview it was, a high percentage of the time it turns out to be a Mission Network News broadcast.

How many stories has Greg told about Christians facing persecution? How many prayers have been offered up by listeners after hearing about a need on MNN, or letters written to Christians in prison or Bibles given to those who need them? I can’t count that high; perhaps in eternity we’ll know.

When I was asked to help start a weekly VOM radio show, one of the first people I called for advice was Greg. When I had pilot episodes ready to share with VOM leaders and some radio friends, he provided multiple pages of feedback, advice and help. And he encouraged me that we could do it, that it was possible. And now we’re doing it every week.

In the 17+ years I’ve been at VOM, Greg has become more than a reporter or another media contact; he’s become a friend. We talk about work, about raising our kids, about running and sore knees. He’s prayed for me and my work, and I’ve prayed for him.

As he steps into a new role of Kingdom service, I know God will bless his efforts. And I know there’s a great team he leaves behind at MNN that will keep helping to tell the stories of our persecuted family.

But I know this too: he will be missed. Thank you, Greg Yoder, for your Kingdom heart, your desire to connect the different parts of the Body of Christ, and your friendship. Well done, my friend.

Todd Nettleton has served the persecuted church and VOM more than 17 years. He has been interviewed more than 2000 times by various media outlets. He's the author of Restricted Nations: North Korea, and served on the writing team for FOXE, Extreme Devotion, Hearts of Fire and other VOM books.

Posted by VOM_MediaDev on August 07, 2015 at 12:15 PM in Inside VOM, Mission Network News, Todd Nettleton | Permalink