Last summer VOM asked our readers to send a letter to Kim Jong Un, the brutal dictator of The Democratic People’s Republic of Korea. Not just any letter, either, but a letter of confession. Each letter began with the words, “I am a Christian.”

It seems such a simple declaration to those of us who live in free nations. I am a Christian.

But it isn’t a simple thing for our brothers and sisters in North Korea. For them, “I am a Christian,” means “I am going to a concentration camp,” or “I am going to be executed.” 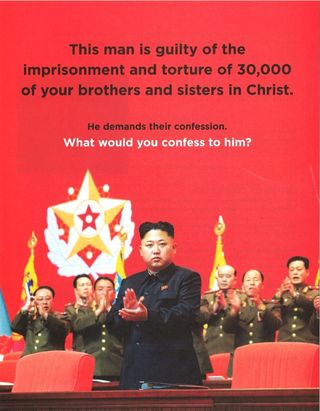 The letter VOM created was based on letters that North Korean Christians, as well as foreign Christians arrested in North Korea, have been forced to sign. But the VOM version finishes with a different confession from those DPRK-approved letters: a confession that the signatory will pray for North Korea, and for Kim Jong Un personally.

More than 93,000 people from 150+ nations signed the letter, and in recent weeks VOM staff have delivered those signatures, as promised, to the North Korean delegation to the United Nations.

That delivery took place in two stages. The first was an in-person delivery directly to the offices of The Permanent Mission of Democratic People’s Republic of Korea to the United Nations in New York City. Because of the logistical and security challenges of getting 25+ boxes into a high-security building in New York City, our first step was to deliver a digital collection of those 93,000+ names of people praying for North Korea.

When our VOM team arrived at the building and checked in at the security desk, one of the guards said, “It’s better to make an appointment with [the North Korean office].” He called up to tell the North Koreans they had visitors.

Ten or 12 minutes later a gentleman from North Korea came out of the elevator and into the lobby. He introduced himself. We shook hands. He didn’t invite us up to his office, so I presented him with an envelope right there in the lobby, with security watching and other building workers coming and going.

It wasn’t a long conversation. I told him that we’d come from Oklahoma on behalf of Christians across America and around the world who were praying for North Korea and were concerned about the treatment of Christians there. I handed him an envelope containing a copy of the Letter of Confession, a brief explanation of it, and a disk containing 93,000+ scanned letters and online signature names from all over the world (signors’ addresses were NOT shared).

He said that he would review the documents and gave me his card. The whole conversation took less than five minutes. He walked back into the secure area and got on the elevator. We walked out onto the busy New York sidewalk. I silently prayed that God would somehow use those signatures and our brief conversation to bless our brothers and sisters in North Korea.

I emailed him a thank you after we returned to Oklahoma; so far he hasn’t responded.

The in-person delivery of the digitized letters and names was the first part of our delivery plan. After all, an envelope, a letter and a CD are easy to ignore or even just toss in the trash. Part two of our plan was the actual printed and signed letters—more than 93,000 of them.

Getting 30 boxes of anything from a warehouse in Oklahoma to a 13th-floor office in the heart of Manhattan is not an easy task. So for this stage of the delivery we called in the experts: UPS. Each box was carefully packed and sealed by our Operations team in Bartlesville. Each was weighed and labeled and ready for UPS pick-up. Because we wanted a way to show that the North Koreans had actually received the letters, we asked for signature from the recipient.

And we prayed, again, that somehow God would get these heavy boxes to New York and into the hands of someone who would care. Someone on whom the fact of 93,000 Christians praying for his or her country might make an impact. Might even plant a seed of Truth into their heart and mind.

Those boxes were delivered this week. They were signed for by a Mr. Kwon.

Thank you to all those who signed a “Letter of Confession” for North Korea. While this Letter of Confession effort by The Voice of the Martyrs is now over, the suffering of our brothers and sisters in North Korea is not. The need for our faithful and passionate prayer for them and their nation is as important now as it has ever been.

The book of Daniel tells us the story of a ruler who held himself up as God and demanded his subjects worship him, just as Kim Jong Un demands today in North Korea. We know the end of the story for those rulers: every knee shall bow and every tongue will confess who the real God is (Rom. 14:11).

Daniel also tells us the story of those who steadfastly refused to deny their faith in the True God. In spite of pressure. In spite of threats of death.

There are people like Daniel and his friends in North Korea right now. They refuse to bow to their evil ruler. They refuse to pray to Kim Jong Un or the dead “eternal president,” Kim Il Sung. Instead they pray to Jesus Christ, knowing such prayers might cost them their earthly life.

I hope you’ll join in that prayer.

Todd Nettleton has served with The Voice of the Martyrs for 17 years. He’s travelled to more than 20 restricted and hostile nations and interviewed hundreds of believers who’ve faced persecution for their Christian witness. As VOM’s principle media spokesperson, Todd has done more than 2,000 interviews with media outlets ranging from Moody Radio to the BBC and Los Angeles Times. He is the principle author of Restricted Nations: North Korea and was part of the writing team for four other VOM books.

Posted by VOM_MediaDev on July 10, 2015 at 11:40 AM in American Christians, Inside VOM, North Korea, Todd Nettleton | Permalink