« How Much Do We Need Jesus? | Main | Video: The Gathering Storm of Persecution in Kenya »

How can a pastor continue leading a church that keeps getting attacked? How can he protect other people after he’s been assaulted multiple times?

These are some of the questions that ran through my mind as 48-year-old Rev. Yakubu D’zarai recently shared his story with me at VOM’s office in Nigeria. 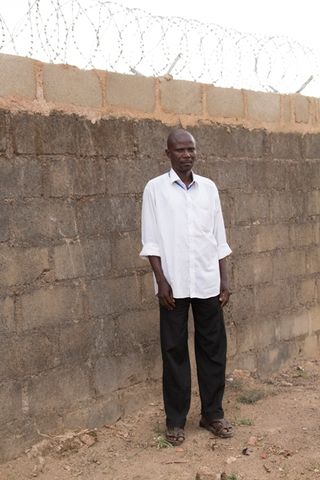 Since 1993, Yakubu has pastored churches in Borno state – where terrorist group Boko Haram is based and Shariah (Islamic law) is rule. Two of his church buildings have been bombed. The first, home to 276 worshipers, was bombed on Dec. 18, 2012. The second, home to 278 worshipers, was bombed on July 1, 2014. In each attack, four people died, many others were injured and everyone lost a sense of security.

During the first attack, Boko Haram members hacked at Yakubu’s head, leg and back with a machete. Fortunately, he didn’t lose any limbs.

So how can any pastor continue his work after experiencing persecution? It helps to expect it.

“The Bible said definitely, ‘in this life there will be persecution, you will be killed for My sake,’” Yakubu said, referencing Matthew 24:9. “I was really comforted in this.”

Most would consider Yakubu to be a rare leader. How many pastors are willing to continue risking their life after they’ve nearly lost it?

The truth is he’s one of many. A growing number of pastors, in fact, are receiving training in how to stand firm in their faith following persecution. Why? These pastors know the power of the gospel and the need for Nigerians in the Muslim-dominated north to hear it.

In March, VOM workers from Nigeria drove through multiple military checkpoints and past numerous burned vehicles along the road – attacked by the same extremists that Yakubu experienced – to get to Borno state. Once there, they trained 50 pastors in how to deal with depression, trauma reduction and stress management. They also further examined what faith looks like in the face of danger. They’re learning to expect persecution.

“We are very optimistic that these pastors were transformed to these several days of fellowship, prayers and interaction in the training, and are therefore returning with new hope and spirit to train others,” a VOM worker said.

These pastors are now charged with training at least 10 other pastors in neighboring villages, bringing the total number of newly trained pastors in Nigeria’s most difficult region to 500 by the end of 2015.

Additional training sessions took place in Yobe and Gombe states, which border Borno to the west, and Adamawa state to the south.

These pastors are truly on the front lines, both physically and spiritually. They’re willing to risk everything because they know it all means nothing in light of eternity.

So what do these pastors pray for? Of course, they ask God for protection, peace and the courage to continue. After all, they’re human. They’re also thoughtful. If you ask Yakubu what he prays for, he’ll tell you he’s praying for you.

“I am praying that God will keep protecting you people and keep you because the Boko Haram members are not happy with how you people are sending help to the Christians,” he said.

“Kelvin Varnsen” is a writer for VOM. He learned about VOM as a teenager after reading Jesus Freaks and began receiving the newsletter. He continues to be inspired by those living out their faith despite persecution.