« VOM Featured on In The Market With Janet Parshall | Main | VOMRadio: Update from Syria »

Under Fire in Sudan’s Nuba Mountains

I am traveling back from the Nuba mountains of Sudan, where I joined VOM workers for nearly a week traveling in the bush inside Sudan. It is impossible to adequately describe the devastation and suffering of Christians in this place. I will spend several blog posts sharing stories and insights from our family members there.

The best place to begin is by explaining that the Nuba mountain region of Sudan is one of the most difficult places to be a Christian anywhere on earth. 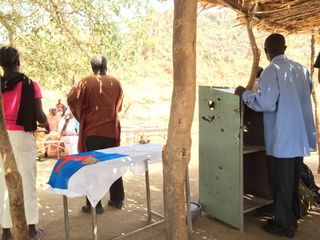 Why do I say this?

2. Nuban Christians experience daily aerial bombardment and rocket attacks by the Khartoum government. They are direct victims of an active genocide campaign designed to eliminate them.

3. There is almost no access to medical care and education. The government has bombed schools and hospitals since 2011, and almost all of them have ceased operations. One child was killed by a bomb that fell while we were there. I’ll share that story in an upcoming post.

While in Sudan, our team visited two former hospitals targeted by bombs and since abandoned by foreign aid organizations. One of those hospitals was targeted for aerial bombardment twice in the last eight months. When 12 bombs dropped on the hospital in the last attack, the NGO operating the hospital decided to pull out of the entire region. Now VOM, in partnership with Persecution Project Foundation, is the primary provider of medication in the area.

We visited the hospital and met with the site manager. He told us that 13 people were saved in that attack by climbing into a foxhole outside the ward when two bombs exploded inside the compound.

Aerial bombardment is a persistent threat that affects every aspect of daily life for Nubans.

It is always disruptive.

It is often tragic.

Honestly, I am still processing many of my own emotions from this shattering experience. Pray with me that we will continue to find creative ways to stand with these suffering family members.

Dr. Jason Peters oversees Global Partnerships and travels frequently to meet with our persecuted sisters and brothers. He has ministered in 39 countries, as diverse as Cuba, India, Sudan, Nepal, Saudi Arabia, Burma, Sri Lanka, Colombia, Kyrgyzstan, Bangladesh, Thailand, Indonesia and Nigeria. Jason ministered as a military chaplain for more than 18 years, with assignments at the Pentagon, the US Air Force Academy and as a faculty member of the Air Force Chaplain Corps College, where he directed Crisis and Trauma training. Jason and his wife Kimberly lived overseas for several years, where two of their five children were born.