« VOMRadio: No Panic in Heaven | Main | VOM and Persecution Featured on Moody Radio »

By the time I leave for work, I’ve used nearly 20 gallons of water between a shower, brushing my teeth, and preparing breakfast and coffee. Last week began with World Water Day (Sunday, March 22), and I invite you to consider the ways you depend on water each day and how this unites you with others around the world who depend on Jesus Christ as our living water. 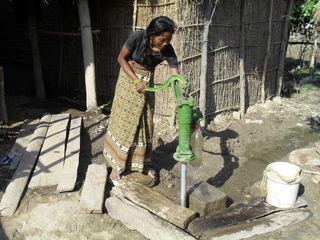 Unlike most homes in the United States, water isn’t readily available everywhere around the world. In some countries, like Nepal, Christians are excluded from using water sources just for choosing Christ. VOM has helped believers in these places build wells because they would not have access to water otherwise.

Last July, I was in Nepal where I saw the work of those serving Christ with all they have. As we drove through the country, the winding roads took us through villages where colorful homes dotted the landscape. Often, as we slowed down for traffic, we would see young children, women, and sometimes men using hand pumps to fill a bucket or jug with water. These were the affluent neighborhoods, and as one VOM worker told us, Christians are not likely to be found in these areas. More rural areas might have one well or draw water from a stream.

Typically forced to the outermost parts of rural villages in Nepal, Christians are often despised in this predominantly Hindu nation. Often relatives or village leaders will try to force new believers to return to their Hindu beliefs. A common tactic to try to force new Christians to recant their faith is to forbid them from local resources, especially water.

One convert to Christianity was hated for his beliefs. His community had one well for drawing water and Hindu radicals resented the man for turning to Christ, so they told him he could no longer use their well. Hoping he might reconsider and give up Christ or even die of thirst, he was told to dig his own well.

“Gyan” didn’t die though, and since he would not denounce his faith, he was forced out of his village. A season of drought came, and the village where the Christian man had once lived dried out. When Gyan learned of their plight, he returned to the village to offer his help, inviting them to use the well that he had dug by himself. Despite the drought, his well had not run dry, and the thirsty villagers welcomed the invitation to use the well he had dug. They even listened to his message about the true living water – Jesus Christ.

Pastor Gyan now leads a thriving church, and those who once refused to let him use their water are the same ones who now know He is the well that does not run dry. He teaches other Christians about persecution, and continues to share his faith with those who do not yet know about the living water. World Water Day highlights both a need for accessible drinking water, but it also stirs up a desire to pray for my persecuted brothers and sisters in Christ.