« Who are the Assyrians? | Main | Utilizing our Freedom »

Yesterday, I was part of a VOM delegation delivering Call For Mercy petition names to the Pakistani Embassy in Washington DC. It was an honor to represent so many American Christians who have prayed for Asia Bibi and her family, and who have added their voices at www.CallForMercy.com, asking the Pakistani government to let this Christian wife and mother out of prison and return her home to her husband and daughters. 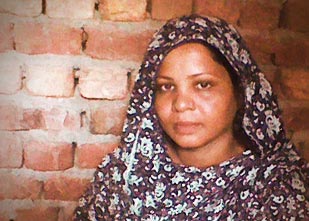 This means that almost 700,000 people have signed the petition and had their voice shared at the embassy during our three visits there.

Once again, we were received cordially and courteously. The embassy official that we met with on the first two occasions is no longer at Pakistan’s Washington DC embassy, and so this time it was a new contact there. He was very kind, and seemed appreciative that Americans would make the effort to speak out on behalf of a Pakistani woman.

He told us that the petition papers we delivered would be put into a diplomatic pouch and returned to Pakistan and to the national government there—something we were not promised on our first two visits.

He said Asia’s appeal is currently filed with the Supreme Court, but didn’t offer any insights about how soon the case will be heard. Our VOM contacts in Pakistan have said that it could be years before the Supreme Court rules. I asked if he felt the judges could rule fairly in spite of threats and the assassination of political leaders who have spoken out in Asia Bibi’s behalf, and he expressed confidence that they could.

I asked if there was any chance of Pakistan’s blasphemy laws—the ones under which Asia Bibi was sentenced to death—being changed. He shook his head with what might have been sadness and said that, at least in the near term, he did not see changes happening.

As we finished our time together, I told him that there were thousands of American Christians who were praying for Asia Bibi, but who also were praying for Pakistan. He expressed his gratitude for our prayers.

We don’t know the impact these petitions will have, but we do know it sends a clear message that the world is watching Asia Bibi’s case; freedom-loving people in every corner of the globe are waiting to see how Pakistan will rule in this important case. Please join me in praying that God will use our visit today to plant seeds that may grow into blessing and even acquittal for Asia Bibi.

If you have not yet signed the petition—and shared it with your Christian friends and invited them to sign as well—please go to www.CallForMercy.com now. Our goal when we launched the petition was a million signatures. We're more than two-thirds of the way there; we need your help to reach our goal.

Todd Nettleton has served with The Voice of the Martyrs for 16 years. He’s travelled to more than 20 restricted and hostile nations and interviewed hundreds of believers who’ve faced persecution for their Christian witness. As VOM’s principle media spokesperson, Todd has done more than 2,000 interviews with media outlets ranging from Moody Radio to the BBC and Los Angeles Times. He is the host of VOM’s weekly radio show, VOMRadio. He is the principle author ofRestricted Nations: North Korea and was part of the writing team for four other VOM books.