« VOMRadio: From Misery to Ministry in Iran | Main | Nigeria: Escape from Boko Haram »

On Sunday, Jan. 18, Pastor Nguyen Hong Quang and his associate pastor were attacked by five men near the Bible college that Quang founded and still leads. 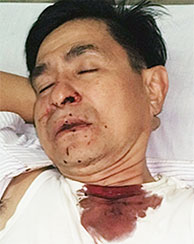 The five men attacked the pastors without provocation, hitting them in the head with bricks and rocks until they collapsed to the ground. The attackers continued their assault even after the pastors were on the ground, kicking them repeatedly. Both pastors were taken to an emergency room for treatment. Pastor Quang suffered a broken nose, broken ribs and injuries to his teeth and jaw. No arrests have been made in the assault.

VOM has worked with Pastor Quang for many years, standing by him during multiple arrests and attacks as well as the destruction of his Bible school by authorities.

Watch a previous interview with Pastor Quang from our video series "Underground Reality: Vietnam" and add your prayer for him at www.icommittopray.com.

Christians from around the world join the "online prayer meeting" at www.icommittopray.com to share their prayers for our persecuted family members like Pastor Quang who suffer for their faith. Pastor Quang and his church members can also see this page, so they can be encouraged by the prayers of their brothers and sisters.

Posted by VOM_MediaDev on February 04, 2015 at 08:00 AM in Intercessory Prayer, Prayer Requests | Permalink