It is hard for most of us to imagine how difficult life is for Christians in many parts of the world. Living as a minority in a hostile context is a daily struggle. Many times, our Christian family members are threatened or attacked because of their faith.

Other times, they are simply overlooked by the judicial system, healthcare providers and local tribal leaders. They are not afforded the same protections and avenues for justice that their neighbors experience. 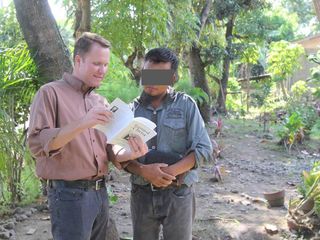 I met with a brother recently in one of the southernmost Islands of the Philippines, Mindanao.  He is a pastor who is ministering in a predominately Muslim area. His church has been burned down by local hostile Muslims and he still fears for his life. He wears a medium-length, wispy goatee (much like an Imam) to avoid unwanted attention from the majority Muslim community. He and his wife do not have any children of their own, but they have reached out to many of the youth in their community.

He shared a provoking story with me about a time when he was kidnapped, along with 29 students that he was leading on a youth retreat. As the pastor and his students walked to the retreat location, they were captured by 25 Islamic rebels.

After the rebels took their clothes, they discovered that that many of the students had Bibles in their bags. When the commander realized they were carrying Bibles, he was scared to touch or desecrate the holy book. The rebels decided to let 28 students go, but kept one student, along with the pastor.

After a total of eight hours, the rebels released the pastor and the other student with nothing but their boxers. As they made their way down the mountain through the thick and thorny greenery, they met crying students who were hiding along the way. It was an incredibly traumatic experience for all of them.

As he clutched his Bible, I asked him to share any scriptures that were especially meaningful to him during this intense ordeal. Without pausing, he quoted, from memory, two verses: “Call to Me, and I will answer you, and show you great and mighty things, which you do not know” (Jeremiah 33:3) and “If you abide in Me, and My words abide in you, you will ask what you desire, and it shall be done for you” (John 15:7).

As he related the story to me with tears in his eyes, he said that they were cut-up and humiliated, but grateful to God that they were released. And, in spite of the opposition, he continues to minister faithfully in this difficult place.

May God enable each one of us to stand strong for Him, wherever He leads us, knowing that He will be with us!

Dr. Jason Peters serves in VOM’s International Ministries department, traveling frequently to meet with our persecuted brothers and sisters around the world. Jason and Kimberly have been married for over twenty years, and have five children who are actively engaged in standing with their persecuted family members.