Persecution Blog: At The Foot of the Snows

At The Foot of the Snows

Several years ago I set a goal to read 25 books a year. And of course, you don’t know if you've achieved a goal or not unless you keep track; so I began to keep a list of the books I had read, along with a paragraph or two of what I thought of the book. 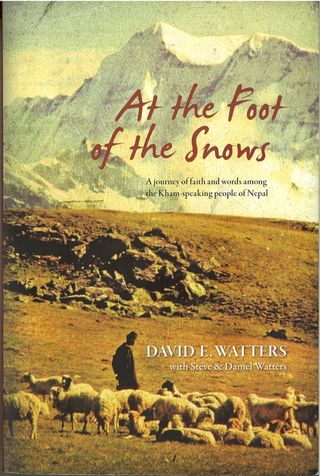 Last year I read 26. The final of those was At The Foot of the Snows: A Journey of Faith and Words Among the Kham-Speaking People of Nepal by David E. Watters with Steve and Daniel Watters—a book that had been sitting on my desk for at least six months, but which I had been slow to open and dive into. I didn’t know what I was missing!

I love missionary biographies. This love dates back to my dad reading to my brother and me, before tucking us into bed, books like Lords of the Earth by Don Richardson and Bruchko by Bruce Olson. What better heroes could young boys have than Stanley Dale or Bruce Olson?

At the Foot of the Snows belongs in that category. It is a book of adventure, as David Watters takes his family to Nepal to translate the Bible into the Kham language. It is a book of hardship, as the soil is so hard and rocky that Waters and his wife almost give up and leave the Kham for good. It is also a book of persecution, as Kham believers are arrested and sent off to prison.

This week I want to share with you some excerpts from the story here on the Persecution Blog; I hope that these small tastes will lead you to buy the book and read it. In fact, I would encourage you to read it to your children. Who knows but that God may use it to call them to some previously unreached people group?

I want to begin with an excerpt that tells the story of David Watters finding the man who would teach him the intricacies of the Kham language and become his translation helper. As he found the man, Hasta Ram, he discovered that God had already been preparing the way:

Then, suddenly, he [Hasta Ram] asked, “Is the ring on your finger a religious symbol?”

“But you’re a Christian, aren’t you?” he asked.

“Yes, I am,” I replied, wondering at his curiosity.

Then, point-blank, right out of the blue, came the question: “Do you know about one called Jesus Christ?”

I was astonished. Unable to find my voice, I nodded my head in the affirmative and stammered, “Where did you ever hear that name?”

Without answering, he got to his feet, took a small key from his pocket, and walked to a locked metal trunk in the corner of the room. He turned the key in the lock, opened the lid, and drew out a small Nepali booklet, dog eared and worn, the pages brown with age, some falling loose from their staple binding.

“I read this book every day,” he said, “as I sit with my cows on the hillside. I carry it everywhere I go. It tells about one called Jesus, but I have not till today found anyone who knows anything about him. If I go with you, will you promise me something?”

“I’ll teach you my language,” he said. “But I’d really like it if you would teach me all you know about this man.”

My heart beat wildly. “I can do that,” I answered. “I’d be happy to teach you all I know about him.”

[YOUR TURN:] Have you ever discovered that—unbeknownst to you or behind the scenes—God has been preparing the way for some work that He’s called you to do? Share your story in the comments to this post.

Todd Nettleton has served with The Voice of the Martyrs for 16 years. He’s travelled to more than 20 restricted and hostile nations and interviewed hundreds of believers who’ve faced persecution for their Christian witness. As VOM’s principle media spokesperson, Todd has done more than 2,000 interviews with media outlets ranging from Moody Radio to the BBC and Los Angeles Times. He is the principle author of Restricted Nations: North Korea and was part of the writing team for four other VOM books. You can see all 26 books Todd read in 2014 on his personal blog.