« VOMRadio: Asking for Persecution? | Main | VOM Featured on In The Market With Janet Parshall »

St. Nicholas: The Real Story of the Man Who Became Santa Claus

Many American children are looking forward to the arrival of Santa Claus on Christmas Eve, bearing presents for good little boys and girls. But most of those celebrating don't know that there is a real man behind the story of Santa Claus, and  that real man was a Christian persecuted because of his faith and actions.

The following is excerpted from "A Note from the Author to Parents and Educators" that is included in The Story of St. Nicholas: More than Reindeer and a Red Suit, a book for children published by VOM that tells the true story of St. Nicholas of Myra, the man whose story became the basis of our modern-day Santa Claus.

Throughout history many legends about the life of Saint Nicholas of Myra have circulated around the world, bringing us to the man we know today as Santa Claus—a chubby man in a red suit who delivers presents to good boys and girls with his reindeer on Christmas Eve.

But who is this man behind the myth of Santa Claus?

Nicholas of Myra was born in the third century in a province called Lycia, which was a part of the Roman Empire. Today ancient Lycia is a part of the country we know as Turkey. Nicholas is believed to have died around 343 A.D., on December 6th, a date that is currently celebrated by many nations, such as Germany, Switzerland and the Netherlands, where it is called “Saint Nicholas Day.” For example, in Germany, children are known to put a boot, called a Nikolaus-Stiefel, outside their front door on the eve of Saint Nicholas Day, hoping he will fill it with gifts if he thinks they were good. But if found bad, they will receive a lump of charcoal.

The real Nicholas was a man full of generosity and conviction. He was born to wealthy parents who, when they died, left him their fortune. He chose to use his inheritance to help those in need. For example, one of the vignettes in the book is about three sisters who were saved from life on the streets. Their father was unable to arrange suitable marriages because he did not have enough money for their dowries. (Therefore, the father was left with no choice but to sell them to a brothel.) Upon hearing this, Nicholas secretly threw bags of gold into the girls’ room. The father was elated and, after discovering his daughters’ mysterious benefactor, was sworn to secrecy by Nicholas that he would never tell anyone who had given him the gold.

Nicholas is recorded to have exposed the corruptness of a government official during a famine. He uncovered the governor’s deceitful actions of hoarding grain until the demand forced it into higher prices. Later, Nicholas intervened in an execution of three innocent men…all falsely accused by the same, crooked governor. It is said that one of the prisoners was situated on the block for decapitation, and Nicholas grabbed the sword from the executioner’s hands, setting all three men free. He was praised for his bravery.

Even though many have preserved the stories of Nicholas’ acts of righteousness, few know of his sufferings for Christ. When the Roman emperor Diocletian took power, he instigated a horrific persecution of Christians. Nicholas was imprisoned and physically tortured (pinched with hot iron pliers) for refusing to deny Jesus as God. One account mentions the prisons were so full of church leaders there was no room for the actual criminals.

After the reign of persecution ended, Nicholas would still face a fierce testing of his faith—this time within the church. A preacher named Arius began promoting a heresy that Jesus was not God in the flesh. Arius even went so far as to set his false teaching to music by putting words to popular drinking songs. Constantine, the new leader of the Roman Empire, called together church leaders at Nicea to discuss Arius’ teachings and other issues dividing the church. This was called the Council of Nicea. According to legend, as Arius was making his presentation, he began singing one of his blasphemous songs about Jesus. Unwilling to see this man shame Christ, Nicholas stood up and punched Arius in the mouth. Those in attendance were shocked! Although they understood Nicholas’ need to stand up for Christ’s reputation, they did not believe they could allow such behavior since Christ taught us to love our enemies and live a life of peace. Therefore, Nicholas was no longer allowed to serve as bishop. (It’s noted he was later restored to his position.) But this action did not stop Nicholas from serving the sick and needy. 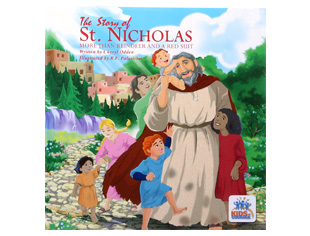 Those who are persecuted for following Christ today are much like Nicholas of Myra: They humbly serve their fellow countrymen and courageously stand for the Lord when faced with the choice of prison with  Christ or no prison without Christ. His story of boldness and generosity in the face of persecution from the government and conflict within the church is for everyone. By any Christian definition, Nicholas was indeed a saint.

May Nicholas of Myra’s life challenge us to live generously by serving the poor and courageously by standing for Christ in a culture that is increasingly hostile to Him and His people!