If You Read Bible in English, Thank William Tyndale

If you read the Bible in English, you owe a debt of gratitude to William Tyndale. This week marked the anniversary of Tyndale’s execution at the stake for the “crime” of translating the Bible into English:

The “father of the English Bible” was apparently born in a hamlet near the Welsh border about 1490. He arrived at Oxford with a gift for languages and began studying the writings of the greatest linguist in the world, Erasmus. He poured over Erasmus’ Greek New Testament and other writings, and he soon began lecturing from them. The Bible was still virtually unavailable in English, and an idea formed in William Tyndale’s mind. 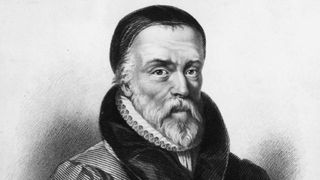 He began proclaiming the value of pure Scripture and of the need to translate it. He was threatened and opposed. “We are better to be without God’s laws than the pope’s,” one man said, voice rising. Tyndale’s reply is among the most famous in church history: “If God spares me, ere many years I will cause a boy that drives the plow to know more of the Scriptures than you do.”

He approached the Bishop of London for help in rendering the Bible into English, but was rebuffed. Tyndale nevertheless began working on his project. Finding his life in danger, he fled to the Continent. There he continued translating, smuggling copies of Matthew and Mark back into London. Spies combed Europe for him, and Tyndale played a cloak and dagger game, hiding and running, translating and smuggling. By 1525 complete copies of the New Testament were being secretly read in England.

On May 21, 1535 Tyndale was betrayed and seized. He languished in a miserable prison cell. His witness there converted the jailer and his family. On October 6, 1536 he was tied to the stake outside of Brussels, strangled, and burned. He was 42.

Tyndale’s final words were, “Lord, open the King of England’s eyes.” That prayer had already been

answered, for King Henry VIII had approved of a new English Bible by Miles Coverdale, Tyndale’s friend. Henry never realized that Coverdale’s Bible was nearly 70 percent Tyndale’s work. In 1604 James I approved a new translation of the Bible into English, and Tyndale’s work became the basis of 90 percent of the King James Version.

Story excerpted from “On This Day in Christian History: 365 Amazing and Inspiring Stories about Saints, Martyrs and Heroes” by Robert J. Morgan. Disclosure: VOM is part of the Amazon Associates program. If you click on the links in this post and purchase the book from Amazon, VOM will receive a very small percentage of your purchase as a referral fee.