« Nigeria Situation Getting Even Worse? | Main | A Picture is Worth... »

I was recently invited to join a small team of VOM staff members to travel to Nepal and help distribute Bibles our donors have provided. Unfortunately, two days before we left, I had to quickly travel to Dallas to see my mother and decide her next step in care. My mother’s health was quickly declining with Stage 4 Lymphoma and severe dementia. My siblings and I had no choice but to move her into hospice. When I returned, I made the difficult decision to continue on with the Nepal trip as her life expectancy was still undetermined. 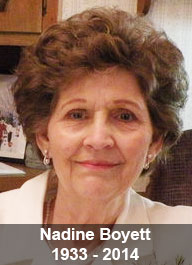 In Nepal, we spent several days driving from city to city visiting churches and distributing Bibles. It was about three days into the trip when I was informed that my mother had passed into eternity. The funeral was in two days. There wouldn’t be enough time to make it back to the states to attend the funeral.

We completed the Bible distribution late in the week and had some downtime before we headed back to the States. We took that opportunity to visit Pashupatinath Temple. Pashupatinath is a Hindu temple located in Kathmandu, Nepal, and is dedicated to the Hindu god Shiva. The temple grounds are a renowned cremation site for Hindus.

Hindus believe the body must be cremated or the soul will linger for days or months while the physical body still exists. After the soul is freed, a person’s “Karma” or the sum of their life’s actions for good or bad determine their next destiny. 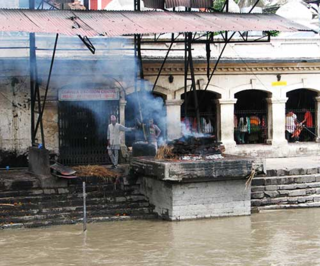 The day we visited the Hindu temple was unfortunately the same day my mother’s funeral was to take place. My mother was a godly woman. Throughout her life, she demonstrated a servant’s heart. She volunteered for years at the local Crisis Pregnancy Center, sewed neck coolers for our military overseas and made new children’s clothes for a charity in Africa. She was very proud of the work VOM does and that I work for them. I love my mother. It was difficult not paying my last respects in person at her funeral, but I know my mother would have been right beside me distributing Bibles if she were able.

As we entered the Pashupatinath Temple courtyard, we gazed across the narrow Bagmati River at the concrete podiums where the bodies were burning. I felt a wave of sorrow descend on me as I watched. I thought about Hindu beliefs in Karma and then considered Ephesians 2:8-9 “For it is by grace you are saved, through faith—and this is not from yourselves, it is the gift of God—not by works, so that no one can boast.”  Good deeds are not enough to save a person. It is only by grace we are saved.

My mother was a good woman but even with her vast years of selfless serving and caring for others, she wasn’t good enough. It is only by the grace of God given through faith in Jesus Christ her Lord and Savior that I am confident about her next destiny. Standing there in the Hindu temple court yard, I thanked God for that confidence and prayed the Hindu families attending their loved one’s funeral that day would also someday have that confidence.

Steven Davis serves on VOM's staff as a Web Developer in the Global Technology Services department.  Before coming to VOM,  he worked at a marketing agency in Dallas, Texas and volunteered as the youth pastor at his church.  Steven, his wife Anne Marie and son Alex learned about VOM through Randy Alcorn’s book Safely Home and then quickly began receiving the newsletter, sponsoring a pastor and seeking opportunities to serve persecuted Christians.