Persecution Blog: Five Truths to Keep in Mind as IS Advances in Iraq

Five Truths to Keep in Mind as IS Advances in Iraq

My heart has been heavy as I read and hear news reports of IS (the Islamic State) giving Christians in Mosul an ultimatum to convert to Islam, pay a high tax (jizya), flee or die. More recently, IS released a video, in which they announced a threat, "Our message to the entire world is that we are the soldiers of the Caliphate state and we are coming." So much of what we are seeing unfold in the Middle East characterizes what has happened to Christians throughout history in that region as well as other restricted nations. As I reflect on this, I am reminded of five truths that are important to remember, in order to keep our eyes focused on what's eternal (Col. 3:2).

1. God is not intimidated by caliphs, dictators, or terrorists.

Throughout church history, there are numerous examples of radical religious groups and political tyrants that have persecuted Christians. For some, Christians were considered a threat to the leaders' totalitarian intentions. Having an entire empire follow a religion or ideology was strategically used to gain loyalty and promote nationalism. An image from a YouTube video shows an IS-affiliated militant holding up the trademark black and white Islamist flag in Iraq.

During the fifth century, Christians in a city in present-day Iraq called Kirkuk came under severe persecution. (Kirkuk was a part of the Persian Empire at that time.) Influenced by Zoroastrian priests, the emperor, Yazdegerd II, didn't think Christians were capable of being loyal subjects of his empire, so he ordered they be eliminated—murdered—in A.D. 448. History estimates 153,000 leaders, clergy and laypeople were rounded up, taken to a mount outside of Kirkuk and slaughtered. The chief prosecutor, Tamasgerd, was so moved by the Christians' resolve that he, too, placed his faith in Christ and followed them in death.

Fast forward almost 1600 years to present-day Kirkuk. Faithful witnesses still persevere in this war-torn land. One pastor of an evangelical church has survived two bombing attempts on his church. He shared with a VOM worker: "Our church has been bleeding out, but I believe all the chairs of the church will be filled by believers from Muslim backgrounds. They are the new generation of the church.”

2. God always finds a way to encourage, grow, and build His church. He's just looking for those willing to count the cost.

Consider Iran. Despite severe restrictions on Christians in Iran, believers are finding a way to reach into this closed country. Christian satellite broadcasts are one of several ways God is reaching into the homes and hearts of Iranians and drawing them into a relationship with Him and helping them grow in Him. In Iran and other parts of the Middle East, many have reported that Jesus has appeared to them in dreams. God always finds a way.

3. God uses His people who are scattered to expand His kingdom.

When believers are forced to flee due to persecution, that shouldn't be viewed as a "kingdom loss." While we grieve with those who lose their homes and come alongside them with our prayers and help, God can use this to expand His Kingdom. This principle is demonstrated during the formative years of the church. In Acts 8, after Stephen was martyred, Saul issued a crackdown on the church. Scripture says all but the apostles where scattered and took the gospel with them, specifically to Samaria and Judea (verses 1-4). The words of Christ in Acts 1:8 were happening, and persecution was the catalyst that pushed the believers out. Being scattered because of persecution can be mightily used to advance His kingdom. 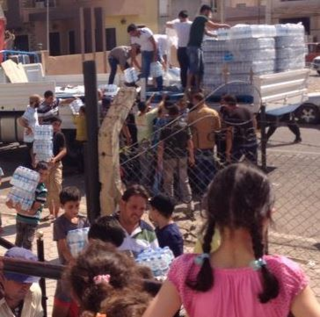 VOM contacts delivering aid to recently-displaced Christians in Iraq. To support this work by giving online go to http://bit.ly/1vHZIjy.

4. You are not helpless.

As we read and hear reports of the brutality happening in Iraq, pray for members of IS. Pray they come face to face with Jesus Christ and give their lives to Him. (Read VOM's book Saul to Paul to be encouraged.) Pray they will be overcome with the courage and endurance of the believers they persecute and choose to place their faith in Christ—like the chief prosecutor Tamasgerd during the massacre of Christians in Kirkuk in the 5th century. Pray for those workers on the front-lines who risk their lives to witness in hostile circumstances. Finally, reach out to Muslims in your community. Show them the love of Christ with the intent of winning them for Him. So many have come to the U.S. in pursuit of a better life. They, too, need to hear about Jesus Christ. You can also support the work of ministries like VOM that are actively equipping and supporting front-line workers and bringing help and encouragement to persecuted believers.

5. The battle is already decided.

Have you read the Book of Revelation? We know who will ultimately win the battle—the Lord Jesus Christ. Until that day, when Jesus makes His final return to take His rightful place, you can stand with your persecuted family by choosing to fellowship with them through your prayers and actions.

This list of truths is by no means exhaustive. Many more are found in God's Word. Please share with us those truths that are keeping your eyes focused on the eternal in light of the situation in Iraq. Thank you for standing with our persecuted family!

Posted by VOM_MediaDev on August 13, 2014 at 12:43 PM in Inside VOM, Intercessory Prayer, Islam, Reaching Muslims for Christ | Permalink