On a recent trip to Nepal, I joined a small team of staff members to do Bible distribution and take part in a pastor’s conference located in the central region of the country..  After several hours of driving, we came to a residential area of colorful but otherwise run-down houses. Most homes didn’t appear to have indoor plumbing as I saw people collecting water and washing their clothes at well-fed water taps residing on each block. From my western point-of-view, these were poor low-income families. Our Nepali VOM staff informed us that these people were part of the upper caste in the area and were all Hindus.  Christians are treated as the lowest caste.  One of the VOM staff told us in a matter-of-fact voice, “you won’t find Christians here.” 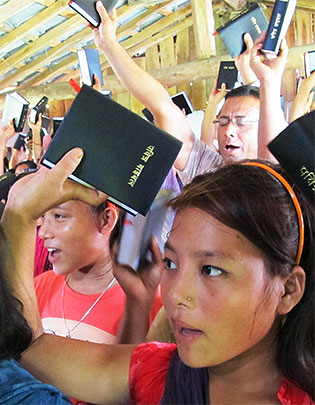 After a few more minutes of driving, the scenery dramatically changed as the rows of colorful old homes became rows of huts made from sticks coated with mud.  The roads were dirt and the water taps had disappeared. My definition of poor had been rewritten. Our Nepali staff informed us that this is where the Christians live.

We arrived at a small, humble one-room church expecting the people to look worn and defeated because they had been ostracized by neighbors for being Christians.  To our surprise, we found incredible faith and joy.  When they sang, they didn’t worry about who would hear them or if they were talented enough.  They sang loudly and boldly.  When they prayed, everyone prayed aloud and the room became alive with shouts of praise and gratitude.

My former youth pastor once told us the last words of wisdom his dying father spoke, “You don’t realize that Jesus is all you need until Jesus is all you have.”  For these church members, there is no healthcare system if they become sick. There is no 401k being built for retirement.  There isn’t even assurance of a next meal, yet they are grateful for a Savior who has set them free and given them lasting hope. Jesus is all they have and that is enough.

Steven Davis serves on VOM's staff as a Web Developer in the Global Technology Services department.  Before coming to VOM,  he worked at a marketing agency in Dallas, Texas and volunteered as the youth pastor at his church.  Steven, his wife Anne Marie and son Alex learned about VOM through Randy Alcorn’s book Safely Home and then quickly began receiving the newsletter, sponsoring a pastor and seeking opportunities to serve persecuted Christians.