Persecution Blog: What Battle Are You Fighting?

« Video: What Does ISIS Control Mean for Christians? | Main | This Day In History: The Martyrs of Scilli »

What Battle Are You Fighting?

During the first part of a recent trip to Nepal I helped distribute VOM’s Christmas Care and Village Outreach packs. VOM readers give to provide these packs each year around Christmas time. Nepal was a recipient of these packs last year. 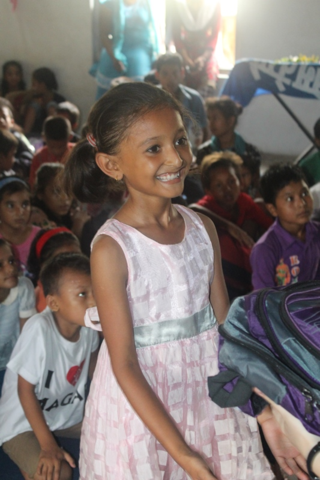 During the distributions in the churches I got to meet many Nepali believers. I was astounded by their faith in spite of the odds their society stacks against them. Christians are only 1.3% of the population in this majority-Hindu nation.  One pastor I met served in a radical Hindu community where they have been repeatedly threatened and told to leave. Three years ago, his home was broken into by the radicals and he and his wife were beaten nearly unconscious and then had every item they owned stolen or destroyed. I asked this pastor why he continued to stay in the village and pastor even after that traumatic experience. This is what he told me:

“To needy people my church has become a house of hope. I see people dying, crying, how Jesus gives them hope. I have seen rapists and drug addicts changed by the love of God. This gives me courage. I am convinced there is no better job in the world then to serve God this way.”

This pastor’s powerful testimony was one of many I heard in Nepal. On the last day of my trip, our contacts took us to see the largest Hindu temple in Nepal. As I walked in I could smell the awful stench of burning flesh. Hindus believe that if their loved ones are burned on altars in this temple after they die they have a better chance of being reincarnated into something noble. We saw temple prostitutes and Hindu priests who cover themselves in the ashes of the dead bodies. And we saw people wailing and sobbing over all the burning bodies.

I know I have painted an ugly picture, but this was a reminder for what life is like without Jesus in Nepal. It was devoid of hope. I started to understand better what the pastor was talking about. It brought home for me the power of Christ’s church and what it means that God’s people are the hope of the world.

Sometimes it’s easy for us to lose sight of the real battle. When I was in that Hindu temple, I was reminded of the real battle. The primary battle of believers in Nepal is not fighting against persecution or trying to stay safe. Their primary battle is fighting to rescue peoples’ souls from the deepest darkness. They recognize that Jesus is the only answer. That darkness can reveal itself in different ways, whether it’s Hinduism in Nepal, Islam in the Middle East, or Juche in North Korea. Christians in these countries are, as we say, on the ‘frontlines’ of the battle to lead people to Jesus.

The scripture says “For we do not wrestle against flesh and blood, but against principalities, against powers, against the rulers of the darkness of this age, against spiritual hosts of wickedness in the heavenly places” (Ephesians 6:12, NKJV). It’s important to remember this battle is the same for us in the United States. No matter what your trial is, your ultimate battle is not a political battle, a financial battle or a battle with your boss or your spouse. You are called in the Great Commission (Matthew 28:19) to a different fight. God has asked us to join Him in his endeavor to seek and save the lost (Luke 19:10). Save your energy to fight in the battle that impacts eternity. And the best part is that you can count on victory in the end (John 16:33, Galatians 6:9, 1 Corinthians 15:57).