Within the past 48 hours VOM workers have received good news about two of the prisoners that have been listed on www.PrisonerAlert.com.

First, we heard that Chhedar Bhote was released from prison last week in Nepal. On July 17, a court declared Chhedar not guilty on the charge of eating beef (remember that Nepal is a mostly-Hindu country).

Then, this morning, we learned that Meriam Ibrahim and her family had landed safely in Rome, Italy, after finally being allowed to leave Sudan. They are on their way to the United States, where Meriam’s husband, Daniel Wani, is a naturalized citizen. 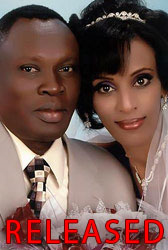 We praise God for these victories! And we are thankful for all those who logged on to Prisoner Alert and wrote letters to the Christians in prison, as well as to government officials in their countries asking for their release.

This is truly a day to praise the Lord! It is also a day to remember those still being held captive for their faith. May the great, positive outcomes of these two cases remind us to keep praying and keep writing and keep speaking out on behalf of those still in prison.

“Remember the prisoners as if chained with them—those who are mistreated—since you yourselves are in the body also.” Hebrews 13:3