Persecution Blog: "My Grace is Sufficient"

"My Grace is Sufficient"

The wife of a man in prison for his work at a Christian bookstore told VOM partners that although she and her children miss their husband and father, she and her family haven’t needed anything except prayer. Cai Hong Li, wife of Christian prisoner Wenxi Li, recently spoke with workers from Release International, The Voice of the Martyrs' sister organization in the United Kingdom.

Wenxi was sentenced to two years in prison in December 2012 for his involvement with a Christian book store. Wenxi, who is from Beijing, was helping set up a Christian bookstore in Taiyuan, the capital of Shanxi province, when he was arrested. Police raided the shop, and according to the South China Morning Post, one of the officials shouted at the bookstore employees, “Don’t you dare bring Christian culture here. This is our turf.” 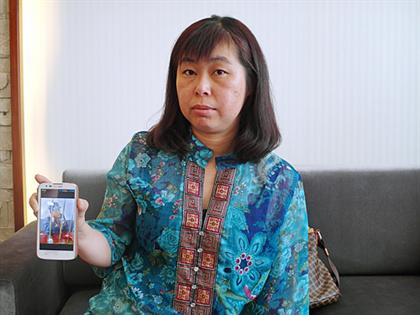 Cai Hong with a photo of her husband taken during their visit with him in prison.

Since her husband’s arrest, Cai Hong’s only visit with her husband occurred in January 2014. She said, “He is doing well and is able to read the Bible in jail, which is amazing.”

Although he is in prison, Wenxi is still able to do the very thing authorities tried to prevent him from doing — share the Gospel. While awaiting trial, he led three prisoners to Christ. When Cai Hong visited in January, he excitedly told the family that several more prisoners had committed their lives to the Lord as a result of his prison evangelism.

Cai Hong told our partners that she is content that God is using a bad situation for His good purposes, even though the family has faced a lot of hardship as a result of her husband’s imprisonment. “I don’t think my husband being in prison is a miserable thing,” she said, “I have already come through the hardest time.”

Last year, the couple’s daughter was in an accident and had to be hospitalized. “At that time, I cried out to God and ask him why all these things were happening to our family. He spoke to me through the verse: ‘My grace is sufficient for you’ (2 Corinthians 12:9).”

When VOM partners asked if she had specific practical needs, Cai Hong said that her church is providing an allowance that meets the family’s requirements. The support not only relieves worry about meeting her daily needs, but it also reassures her children about their father. “My children know that their father is in prison, but I tell them that he has done nothing wrong. The church takes good care of us.

“We have never wanted for anything,” she said, because God’s grace has been sufficient. The one thing Cai Hong desires most is that her Christian brothers and sisters support her family through prayer. “Prayer is the most precious thing.”

Write a letter of encouragement to Wenxi Li on Prisoner Alert.

A version of this story also appears on VOM's main web site. www.Persecution.com.

Posted by The Voice of the Martyrs on May 22, 2014 at 01:25 PM in China, Intercessory Prayer, Prisoner Alert | Permalink