I now have a better idea of the answer to that question in Malaysia. On a recent trip for VOM, I was surprised by what I learned from our contacts and the believers there. A tactic used widely by Muslims to gain converts is bribery.

Muslims in Malaysia are notorious for offering those of other faiths money, job positions, housing, even full-ride scholarships to college;  all contingent upon their conversion to Islam. Sometimes, in the more remote villages, it’s even as simple as Muslims from the city driving out to the village and offering bags of money to any family that is willing to convert. You can imagine how difficult this is in countries wrecked with poverty and where a high percentage of the population faces the constant fight to survive.

The interesting catch is that these conversions are very one sided. In Malaysia every person is born with an identity card, similar to a birth certificate. On this card it says your religion, for example “Muslim” or “Christian.”  Christians, or any other religion besides Islam, are welcome to change their identity card at any time from their birth religion to “Islam.” However, it is illegal and impossible for a Muslim to ever change their identity card. Literally, until the day they die; even if they professed Christianity and are buried in a Christian graveyard, the Muslim representatives of the communities will come and dig up the body to give it a Muslim burial.

Of course, it is also illegal for any other faith to “proselytize” (witness) to Muslims.

The Malaysian government used this tactic with a group of refugees from the dangerous island of Mindanao, in the Philippines. The group was trying to flee from Mindanao, away from the violence of Muslim terrorist groups there, but the Philippines wouldn’t recognize them as citizens because they lived in Mindanao. The Malaysian government stepped in and offered them asylum on one condition: convert to Islam. They readily agreed.

Where are these new Muslim converts now? They are refugees living in extreme poverty is a slum I visited in Malaysia, with no help from the nearby mosques or the Malaysian government.

Our contacts support young church leaders who go into this slum every Monday-Friday bringing food, meeting with families, and teaching the children English. Slowly, they are starting to teach them Bible stories and tell them about Jesus. I will never forget the look of joy on the dirty faces of these children as they sprinted across piles of trash to embrace their teachers coming to the slum to be with them. 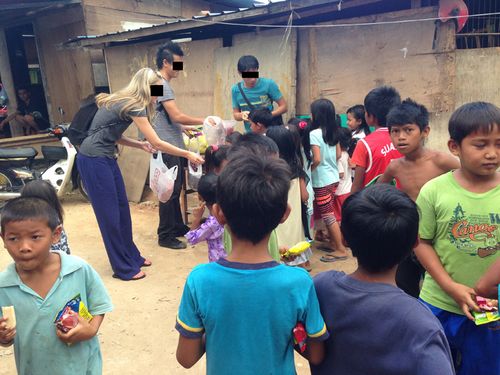 Eventually, the truth comes out. Islam in Malaysia, though it may seem to promise freedom from poverty through bribery, ultimately causes bondage. Christianity, though it seems to promise persecution in many restricted and hostile nations, ultimately brings freedom.

As believers, it’s our responsibility to offer the world something much greater than a bag of cash.

"Grace Taylor" serves on the staff of VOM. She was first introduced to the ministry of VOM by her parents and grandparents, who received the VOM newsletter, and through the VOM book Jesus Freaks. She has served in 12 different countries and is passionate about helping expand God’s Kingdom throughout the nations of the world.