« A Russian Resurrection Sunday | Main | "I Surrender Myself Entirely" »

In order to answer that question, let’s look at the definition. Merriam Webster dictionary defines social justice as: “A social philosophy advocating the removal of inequalities among people.”

In the last few years the social justice movement has exploded; it’s become trendy to have a social justice issue you champion. My peers are seen sporting their Tom’s shoes or writing love on their arms. Human trafficking, clean water and child soldiers are some of the most popular causes, to name a few. I think it’s safe to say all of these causes are striving to eliminate some kind of injustice. Seeking to “remove an inequality” as the definition above states.  And so they should: we want to see an end to these atrocities.

So where does Christian persecution fit into the social justice noise? I would submit to you that maybe it doesn’t, at least not in the way most other causes do. Based on the definition of social justice, it would lead us to believe that we are trying to remove or eliminate the injustice of Christian persecution.  However, that shouldn’t be the goal, and it’s not the goal at The Voice of the Martyrs. II Timothy 3:12, Philippians 1:29, John 15:19-20 help explain why this can’t be our goal. The Bible says Christians will always be persecuted and suffer for their faith and it won’t end until Jesus returns.

In fact, what we do at VOM can even make persecution worse for Christians. If we didn’t deliver Bibles to believers in hostile and restricted countries, there might be less arrests. If we didn’t equip believers to share the gospel in Muslim countries, there might be less converts, which would mean less persecution, ostracism or honor killings.  Whenever light and darkness collide so forcefully, there is a reaction. There are nations and areas where Satan has a stronghold of people in bondage and he won’t give it up easily. 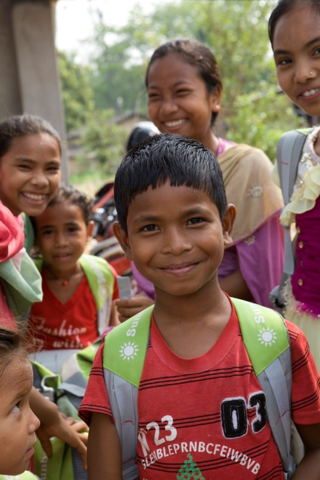 A Christian boy in Nepal received a back pack of school supplies from one of VOM’s recent distributions.

In one sense, persecution can actually be seen as a specific Kingdom strategy. Persecution is a classic example of how what Satan means for evil, God uses for good. Often, persecution actually causes the church to grow and be built up. Paul says in Philippians 1:14 that because of his chains, other believers have been encouraged to speak the word of God more courageously and fearlessly. The fastest growing church in the world is in Iran, a nation where it is illegal to convert to Christianity!

So what is our goal for persecuted Christians? It’s to be the body of Christ to them and with them. Persecuted Christians are not a cause, they are our family. You are standing with your family and saying, “yes I agree with you, Jesus is worth it all. And I will support you in this endeavor, whatever that looks like.” Maybe it’s that they are in danger and need to be in a safe house or maybe they need medical care from an attack or a pool to conduct secret baptisms or motorbikes to reach remote villages with the gospel. Whatever it is, we are their family and we are with them. And all of this is not with the hope of ending persecution; it’s with the hope of advancing God’s kingdom.

As you stand with them, you will start to notice you are not only giving but you are receiving as well. Your own faith is challenged and inspired by their lives and testimony. We start to ask ourselves the hard questions: “Have I also counted the cost to follow Christ?” So it’s not just one sided, it comes full circle; this is the beauty of the global body of Christ.

Thank you for your thoughtful and well stated comments. Tonight I will be sharing with a Community Group from my church who want a VOM "project". I will read your comments to them about the persecuted not being a cause but a family we are standing with.

The Biblical perspective of the persecution of Christians should not be based on how we react to the human doctrine of social justice. It should be based on the justice and righteousness that first of all comes from God (Amos 5:24) and secondly should be reflected in the laws of nations. This is where "natural law" comes from, which produced our Declaration of Independence and Constitution. The Christian "goal" should be to expose persecution to the light (John 3:20) by proclaiming the truth. That very act is a form of resistance that many in the church are shying away from. Just because Scripture tells us we will be persecuted is no reason to justify lying down in defeat. Christians need to speak out against social injustice -- not because we think we can change the world, but because the world needs to hear the message of the Gospel and know that God doesn't want anyone to be mistreated or abused.

So well-said. Trying to understand the differences between social justice and what's biblical, I haven't found many articles that place Scripture and God's ways over man's. In this you do, and I'm grateful. I will be promoting the article in this week's blog post at tla-ht.blogspot.com/ God bless you and the work you do.