Persecution Blog: "I Surrender Myself Entirely"

« Is Christian Persecution a Social Justice Issue? | Main | "My Grace is Sufficient" »

"I Surrender Myself Entirely"

Michael Sattler, born in Germany around 1490, became a Benedictine monk. As he studied Paul’s letters, he grew dissatisfied, left the monastery, married, and became a Lutheran. Sometime later he became convinced of believer’s baptism and became an Anabaptist of growing renown whose ministry attracted both converts and enemies. 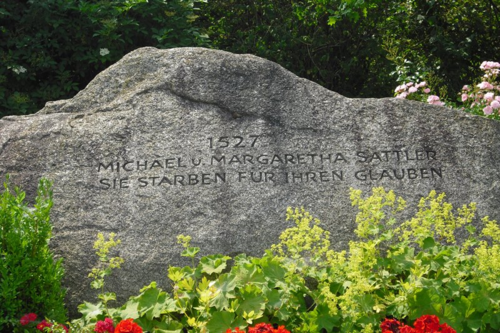 On the road to Kiebingen, where the gallows used to be, there is a memorial for Michael Sattler and his wife erected on the site of his execution.

Sattler, his wife, and a handful of associates were arrested in the mid-1520s and imprisoned in the tower of Binsdorf, where he wrote a letter to his flock:

The brethren have doubtless informed you that some of us are in prison. Numerous accusations were preferred against us by our adversaries; at one time they threatened us with the gallows; at another with fire and sword. In this extremity, I surrender myself entirely to the Lord’s will, and prepared myself, together with all brethren and wife, to die for his testimony’s sake.

On May 20, 1527 his torture, a prelude to execution, began at city center where his tongue was sliced. Chunks of flesh were torn from his body with red-hot tongs, and he was forged to a cart. On the way to the stake execution the tongs were applied five times again. Still able to speak, the unshakable Sattler prayed for his persecutors. After being bound to a ladder with ropes and pushed into the fire, he admonished the people, the judges, and the mayor to repent and be converted. “Almighty eternal God,” he prayed, “Thou art the way and the truth: because I have not been shown to be in error, I will with thy help to this day testify to the truth and seal it with my blood.” As soon as the ropes on his wrists were burned, Sattler raised the two forefingers of his hand giving the promised signal to his brothers that a martyr’s death was bearable. Then the assembled crowd heard coming from his seared lips, “Father, I commit my spirit into thy hands.”

Still others had trial of mockings and scourgings, yes, and of chains and imprisonment. They were stoned, they were sawn in two, were tempted, were slain with the sword. They wandered about in sheepskins and goatskins, being destitute, afflicted, tormented— of whom the world was not worthy.  (Hebrews 11: 36-38a)

Story excerpted from On This Day in Christian History: 365 Amazing and Inspiring Stories about Saints, Martyrs and Heroes by Robert J. Morgan. Disclosure: VOM is part of the Amazon Associates program. If you use the links in this post to purchase the book from Amazon, VOM will receive a very small percentage of your purchase as a referral fee.