Two sisters, Kamka, 19, and Naya, 16, were sleeping when radical Muslims invaded their home. The armed terrorists entered their brother's room and shot him in the hand before demanding to know where the girls' father was. When they realized the two sisters were not married and their father was not home, they took the girls by force. 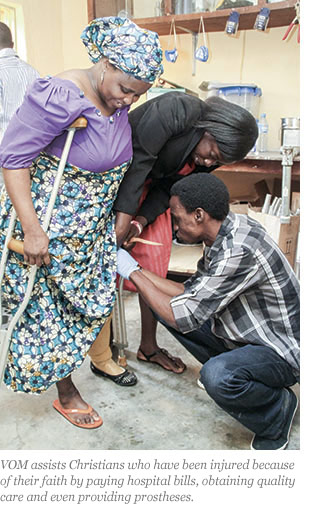 After forcing Kamka and Naya to walk through the woods at gunpoint, the terrorists immediately put them to work fetching water and cooking. A few days later, the girls were told that both of them were to be married. “We're too young,” Naya protested. But the leader then showed them his daughter, a girl of 7 or 8, who was already married.

“If we refused to cooperate, we would be killed,” Naya told a VOM worker. “The man whom I was forced to marry took me. He picked up his gun and a knife and threatened to murder me if I continued to resist.”

The sisters cried and prayed together, unsure of what would become of them. But after two weeks, a Muslim woman took pity on them. While fetching water with the girls, she showed them an escape route and told them to run away.

The girls escaped under cover of darkness. They knocked on the door of the first house they came to, praying the owner would be friendly. Although he was Muslim, the man took pity on the girls. He allowed them to bathe and eat, and then had his sister take them to a nearby Christian village.

The girls were traumatized by their experience but are now doing reasonably well. Since it is unsafe for them to return to their home, VOM is providing care for them at a safe house through one of our project partners.

“I thank God that He has saved us from the hands of these bad people,” Naya said. “Everything is now behind me and I'm not afraid anymore. I only want to look forward now.”

And Kamka is also thankful for God's protection. “I am very grateful that many Christians pray for me,” she said. “Despite what I've been through, I still have faith in God.”

The Voice of the Martyrs invites you to support our work in Nigeria. Your contributions help believers like Naya and Kamka as well as providing support to families of martyrs and medical assistance to victims of extremist attacks.

Please remember to pray for those kidnapped by Boko Haram and for all our brothers and sisters in Nigeria who are under attack. Share this post with your Christian friends so they can join us in prayer.