Persecution Blog: By Choosing Christ, Her Children Will Be Orphans

By Choosing Christ, Her Children Will Be Orphans 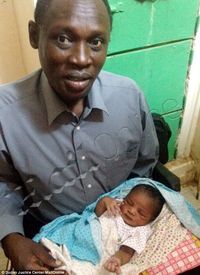 Maya, the second child of Meriam Ibrahim and Daniel Wani was born earlier this week in a prison clinic, where her mother awaits execution for refusing to renounce Christianity. Maya and her 20-month-old brother, Martin, will remain in prison with their mother until she is weaned. Then, she and her brother will become orphans if Sudan’s government carries out Meriam’s death sentence.

The children’s father and Meriam’s husband Daniel, was finally able to visit his children on the day after Maya’s birth. When he spoke with his wife, she expressed no regrets. “If they want to execute me then they should go ahead and do it because I’m not going to change my faith.”

In court, the judge repeatedly gave her opportunity to recant her Christian faith. She stated openly that she had never practiced the religion of her father and that she was a Christian. The judge gave her three days to change her mind or be charged with apostasy. Meriam came back to court and told the judge she would not change her mind.

Meriam told her husband, “I refuse to change. I am not giving up Christianity just so that I can live. I know I could stay alive by becoming a Muslim and I would be able to look after our family, but I need to be true to myself.”

Meriam Ibrahim has already died to herself and lives in Christ. She is ready to die for her faith, but I cannot imagine the sorrow that she and her husband are enduring as their two young children are kept alongside her in chains, and as they imagine a future without Meriam.

I can only imagine the conditions she is living in at the prison, where guards are reportedly mistreating her and where Muslim prisoners are rallying around her. I can only imagine her pain as she tries to care for her two young children while trying to keep her hope alive and her faith vibrant. I can only imagine Daniel’s anguish at his inability to help his wife while separated from his children.

As members of the body of Christ, we are called to “Remember the prisoners as if chained with them—those who are mistreated—since you yourselves are in the body also.” (Hebrews 13:3). We are also called in Isaiah 58:6 to “loose the bonds of wickedness, To undo the heavy burdens, To let the oppressed go free.”

Please pray for Meriam and her family. Pray for comfort for her in prison. Pray that her example will have an impact on those around her and on the whole nation of Sudan. Pray for her husband Daniel and the lawyers who are working to help her. Pray that Meriam and her children will be freed.

Post a prayer for Meriam at iCommitToPray and learn more at Persecution.com.

Posted by The Voice of the Martyrs on May 30, 2014 at 02:21 PM in Ann Kay, Christian News, Christian Persecution, Prayer Requests, Sudan | Permalink