Persecution Blog: Should We Smuggle?

A couple of weeks ago, I was asked to teach a missions class at a Christian university. The topic was “Smuggling” and it was an excellent opportunity for me to share our perspective on a controversial topic. One of the reasons that the topic of smuggling is so hotly debated in Christian circles is that many misunderstand a biblical hierarchy of authority.

One fact is clear: persecuted Christians are asking for Bibles. What will we do about it? 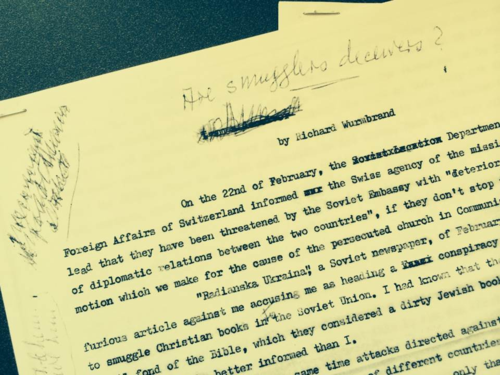 VOM workers take risks to get God’s word into hostile and restricted nations. We are willing to work hard to get God’s Word to spiritually hungry people!

There are several explicit scriptural examples of breaking civil laws for God’s purposes. Here are a few quick examples that Richard Wurmbrand, our founder, alluded to: Michal put a doll in David’s bed to deceive Saul’s soldiers (An innocent man that had been anointed by God escaped), Rahab helped the spies smuggle themselves out of Jericho (Rahab is referred to as an example of faith in the NT), and Mary smuggled Jesus to Egypt (The law of Herod would have obliged Mary to give him up to death).

These examples are compelling and are worth digging into further. But, perhaps the most compelling examples emerge during the earliest days of the Church.

Two key verses report the apostles’ response to the command to stop spreading the good news about Jesus: “But Peter and John answered and said to them, “Whether it is right in the sight of God to listen to you more than to God, you judge. For we cannot but speak the things which we have seen and heard” (Acts 4:19–20).

But, wait, the case for illegal activity in the name of God becomes even more compelling when you flip the page in your Bible to Acts chapter 5. The local authorities, the High Priests, and the Sadducees were plagued with jealousy. So what did they do? They arrested the apostles and put them in the common prison. Consider verse 19: “But at night an angel of the Lord opened the prison doors and brought them out, and said, ‘Go, stand in the temple and speak to the people all the words of this life.’”

What? Are you saying that an “angel of the Lord” actually told Peter and the other apostles to break the law? Unbelievable!

Wow! What a defining moment! Little did Peter and the other apostles know that their reaction to these threats would radically impact the history of the Church.

This would not be the last time that the apostles would suffer for Christ—they would face many more opportunities to suffer for His name’s sake. Are we willing to take that risk?

Dr. Jason Peters serves in VOM’s International Ministries department, traveling frequently to meet with our persecuted brothers and sisters around the world. He lived overseas for five years and has ministered in more than 30 countries as diverse as Cuba, Nepal, Iraq, Nigeria and Indonesia. He and his wife, Kimberly, along with their five children, count it a great honor to serve with the persecuted church.