VOM's November newsletter was a special update on the situation for Christians in Syria, in the midst of a horrific civil war. In recent months our office has 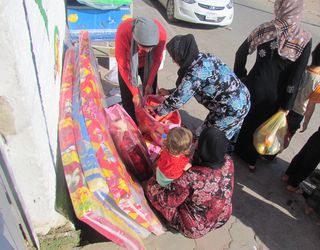 put a special emphasis on how we can assist Syrian Christians both inside and outside Syria. Those plans are being implemented now. In order to keep our workers and Syrian Christians safe, we can’t describe the exact nature of how we’ll be helping, but when we are able, VOM will update our supporters on how we have been helping persecuted Syrian believers.

Here is a recent update from one of our VOM contact inside Syria.

Since the beginning of the conflict, two small towns in Syria have been a place of refuge for 4,500 families, who were forced to flee their homes in other areas of Syria. The villages are historically Christian and both communities have lived in peace with their Muslim neighbors for decades. Since the arrival of the displaced, Muslims and Christians continued to live in harmony.

On the morning of Oct. 21, 2013 the situation took a dramatic turn for the worse.

Read the rest of this important update on Persecution.com.

Christians.......look up the way to Alaska from where you are. We can help you if you were to come here the best way we know how. Thats exactly what its suppose to be about. We love you.