Somalia: A Reminder to Pray

If you go to the movies this weekend, you might see the newly-released movie called Captain Phillips, which is based on the rescue of those aboard the US cargo ship Alabama from Somali pirates in April 2009. And if you have The Voice of the Martyrs’ mobile prayer app installed on your phone, you will already know that Somalia is this week’s prayer focus.

Thought to be one of the world’s most corrupt nations, Somalia has lacked a stable government since 1991. Pirate attacks like the one on Alabama made many aware of just how dangerous Somali waters can be, but many people still do not understand the dangers that Christians in this country face on a daily basis.

Somalia is made up of 99 percent Muslims. Less than 1 percent of the population is Christian, and they must practice their faith in secret house churches for fear of harsh persecution. The al-Shabab Islamic extremists have vowed to annihilate all Somali Christians.

In Sept. 2013, a 35-year-old Christian, Fatuma Isak Elmi, was killed in her home by al-Shabab. Her 4-year-old son witnessed the attack, and his cries alerted neighbors that something was wrong. A note delivered that morning had warned the family that they were “polluting our religion” and that the al-Shabab were coming to kill them because of their faith. Elmi’s husband was not at home during the attack, but he took his son into hiding as soon as he learned of his wife’s tragic death.

In early 2013, this same group killed a husband and wife in separate attacks because they had converted from Islam to Christianity. A few months ago, their 13-year-old nephew from another town was kidnapped by al-Shabab in order to draw out his Christian parents and relatives. 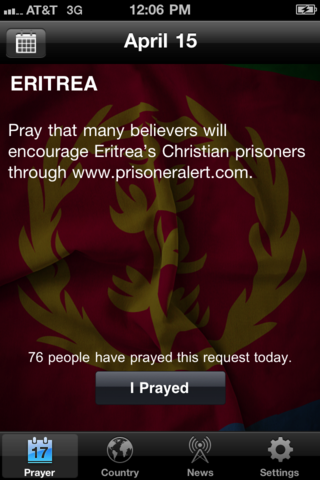 As I have used the VOM prayer app and been given specific prompts for Somalia this week, I have been reminded of the people who stand up for Jesus against enormous odds. Children and adults alike face kidnapping, torture and even death to follow Jesus in this country.

I am encouraged to see that many others are using the app to indicate “I prayed” and are also sharing it with their friends or family through Facebook and Twitter. It encourages me to pray more fervently and to live out Hebrews 13:3, “Remember the prisoners as if chained with them — those who are mistreated — since you yourselves are in the body also.”

YOUR TURN: How has this mobile app impacted your prayer life?

Ann Kay is a writer for VOM. She learned about VOM five years ago when she read Tortured for Christ and began receiving the newsletter. She is passionate about reaching the world for Christ and sharing stories of the persecuted church.

i do not have a phone but i still pray. thx for the app. your's in Christ Jesus.