UPDATE: Chased Into the Jungle

“Many sorrows shall be to the wicked; But he who trusts in the Lord, mercy shall surround him. Be glad in the Lord and rejoice, you righteous; And shout for joy, all you upright in heart” (Psalm 32:10, 11).

A few months ago, I shared the story of a strong ministry leader, Pastor Eduardo. One of his sons was recently killed by FARC guerrillas, and another son was chased into the jungle where he hid, all alone for four days.

Meanwhile, Eduardo and his wife believed that the FARC had killed their older son and kidnapped the younger one. They buried their older son two days later, while their younger son was still hiding in the jungle. He missed his own brother’s funeral. A couple of days later, after everything quieted down, the father went to look for the son and, by God’s grace, found him hiding in the jungle. Today they have moved to a new area, where VOM is supporting them as they plant a church there. 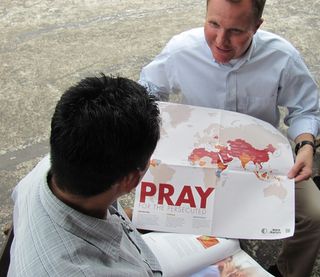 Showing prayer map to Pastor Eduardo
Just a few days ago, I was honored to meet with this dear family again. Our team drove for several hours, much of it on bumpy dirt roads, to visit their home and to encourage them face to face.

This family has given up much for Jesus: one of their sons, their former home and their community, with the comfort, familiarity, friendships and family that so many of us take for granted.

In spite of all of their sacrifices, our visit was filled with joy! As I showed them VOM’s prayer map, they were encouraged to discover that they are not alone. Many of their sisters and brothers around the world join them in solidarity as they stand strong in the midst of persecution. They were also filled with joy because they were reminded that thousands of people have prayed for their family.

Then, with huge smiles on their faces, Eduardo and his wife shared that they are expecting another child! Gloria a Dios! The pain of losing their son has not disappeared, and there were tear-filled eyes around the room as we talked about him. But, these eyes were also lit up with excitement! They rejoice because they are experiencing the indescribable mercy of God in the midst of their struggle.

As we prepared to leave, Pastor Eduardo stood on the roof of his house and pointed with excitement to a part of town where he hopes to see his growing church expand their outreach into the community.

Please remember Eduardo, his wife, their 5 sons, and their unborn child in your prayers as they continue to stand strong. May God help all of us to faithfully follow him, despite the difficulties and opposition we encounter.

Dr. Jason Peters serves in VOM’s International Ministries department, traveling frequently to meet with our persecuted brothers and sisters around the world. He lived overseas for five years and has ministered in more than 30 countries as diverse as Cuba, Nepal, Iraq and Indonesia. He and his wife, Kimberly, along with their five children, count it a great honor to serve with the persecuted
church.